We are dedicated to fighting for the truth and exposing the corrupt in all branches of the military including various divisions of the American government associated with the military. We attempt through the exposure of corruption to fix what is broken.

Unfortunately, the military sometimes does things because, “that’s the way we’ve always done it!” Whether it’s right or wrong is frequently not a concern – America’s military sometimes does the wrong thing over and over and over again. The biggest problem we chronically see is unlawful command influence, and we will continue to expose criminal and unethical misconduct wherever and whenever it occurs.

MCC is now headquartered in California, but we have freelance writers and confidential sources all over the globe that contribute to our articles.

HOW WE GOT STARTED… 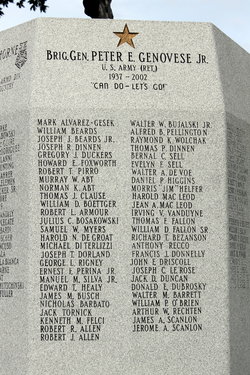 MilitaryCorruption.com (MCC) was established by Brigadier General Peter E. Genovese Jr., and Major Glenn MacDonald in year 2000. BG Genovese joined the U.S. Army as a tactician and battalion commander. He became a full colonel at age 42, and was promoted to brigadier general at age 47. Following his tour with the Army, he joined the New Jersey National Guard.

BG Peter Genovese passed away on May 19, 2002 at age sixty-four. Of all his accomplishments, which were many, he was no doubt most proud of establishing this website and his position as Chairman of the Board for MilitaryCorruption.com.

Two years before his death, General Genovese asked his trusty assistant Major Glenn MacDonald if he would create a website to expose the corruption occurring all around them. Genovese said he would fund it, if MacDonald would write it and a new alliance was formed to FIGHT FOR TRUTH AND EXPOSE THE CORRUPT.

OUR LEADER FOR EIGHTEEN YEARS

In the early days, Major MacDonald was an Army combat correspondent covering the Vietnam War. As he was boarding a helicopter one time in 1967, the  pilot tossed him an M-16 saying, “If you fly with us, you fight with us.” MacDonald personally witnessed the horrors of war in Vietnam. Frequently, he found himself in the thick of the fight.

MacDonald’s SP4 combat photographer was nearby covering the street fighting Nha Trang during the Tet Offensive 1968, and received a fatal shot to his head as he stood up to take a picture. MacDonald had the unenviable task of removing the camera strap from the neck of his deceased friend and assigned photographer.

Witnessing a personal friend die on the field of battle is one of the many reasons that MacDonald fights so valiantly for truth and exposing the corrupt in the military. He feels that no one should bring disgrace upon the military he loved so deeply. Upon being released from active duty in the Army, MacDonald continued his association with the military in the National Guard and Army Reserve.

In his civilian job he worked in various journalism capacities including the rough and tumble world of tabloid journalism at the New York Post where he covered the mafia, corrupt politicians, and an up-and-coming businessman by the name of Donald J. Trump.

Trump offered MacDonald a job long before he became President, but Mac preferred to remain in the Newspaper Guild as a beat reporter because it provided better job security. Since the year 2000, an article has been posted to MilitaryCorruption.com about every forty-eight (48) hours. While we are not there yet, one day we’ll be able to post articles on a daily basis and have our own TV show.

Over nearly two decades and under the extraordinary leadership of Major Glenn MacDonald, MilitaryCorruption.com established trustworthy contacts all over the world that help us monitor the American military as well as military-related government organizations.

Major Glenn MacDonald passed away in late May of 2019 at the age of 71, from complications associated with his exposure to Agent Orange and because he was going through an extremely stressful time in his life. He left a lasting legacy for all of us to emulate.

And the fight to eliminate the multi-tiered legal systems within in the military continues. As Major MacDonald coined the phrase, “Different Spanks, for Different Ranks.”