This story is about Navy Chief Petty Officer (CPO) Nate Duszynski who worked in the engine room of a nuclear aircraft carrier. Duszynski had seventeen (17) years in the military when the Navy decided to 86 him and demand return of his bonus reenlistment money. This case should be discussed even though it’s not a case of corruption (as far as we know). See the video below, then let’s discuss the matter.

P.S. The term, to “86” something, originated in the Navy from the U.S. Navy’s Allowance Type (AT) coding system used for logistics. The allowance type code is a single digit that identifies the reason why materiel is being carried in stock. Throughout the life-cycle of a warship, many pieces of equipment are upgraded or replaced, requiring on-board spare parts to be disposed of, and the code is AT-6 for parts designated for disposal.

Following World War II, there were a great number of warships being decommissioned, sold, scrapped, or deactivated and placed in reserve (commonly referred to as “mothballed”). During this process, labor workers would bring up spare parts from the storerooms and the supply clerk would tell them the AT code. Anything to be disposed of was referred to as AT-6— which is pronounced the same as “86”.

A quick look at both sides…

Duszynski received a reenlistment bonus of nearly $100K, because the Navy has trouble either keeping people in that rating, or is experiencing a higher than average retention loss rate. He took the money, then had some health issues which meant he could no longer do his job. Since the Navy is a fighting machine, they need people at their peak at all times. Since he could no longer perform his job to the satisfaction of the Navy, he was ushered out the door. Since he did not adequately fulfill the terms of his enlistment bonus contract, he has to return the money to Uncle Sam.

Duszynski faithfully gave seventeen years of his life to his country in the engine room heat and stench of a nuclear powered aircraft carrier. Military members many times find themselves in jobs that requires sacrifices that most civilian jobs never require. In exchange for the arduous duty and family separation sometimes amounting to years in certain situations, the military offers a retirement in only twenty years.

Duszynski contracted a mental illness, or he always had the illness and the stresses of his job made his depression manifest itself, who knows. While he did not make it to the twenty-year mark, the Duszynski family did give the American war machine seventeen years of their lives.

So, the Navy fired Duszynski from his job and ushered him out of the Navy with an honorable discharge and a medical disability. He spent a sizable portion of his reenlistment bonus money on medical bills associated with his son’s health issues. He feels that since none of this was within his control, the Navy should waive their demand for return of his reenlistment bonus money.

When we think of all the deranged, psychotic and idiotic people in Washington D.C. who are literally wasting billions and billions of dollars, it seems that waiving the requirement of paying back this reenlistment bonus is a prudent thing to do.

All members of our military should beware; if for any reason the military wants to get rid of you, they will. Remember what the Navy did to CPO Michael Tufariello when he didn’t go along to get along. They threw his ass in a mental hospital. The fact that Duszynski had bills to pay, or an ailing son means little or nothing to America’s mighty war machine. It hurts us to say it but it’s true.

The military has to continually train for the future war and maintain all equipment and personnel at peak readiness. The American military has limits on their compassion. If we had 10 cents for ever gallon of gasoline the Navy dumps into the atmosphere in order to bring their jets aboard an aircraft carrier, we could provide everyone in the Navy with a $100K bonus. 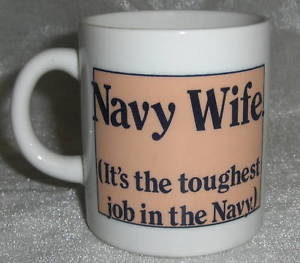 One of the biggest victims in this whole story is Mrs. Duszynski. Because of her husband’s sacrifice to his country, like most Navy wives had to raise the kids by herself. Then, when her husband has health issues, her role as a Navy wife went from bad to worse.

The bottom line; if the Navy has no further use for you, then they care even less about your family. You and your family could get a big 86, just like an old part that’s no longer needed. If it’s any consolation the same thing happens in the civilian sector. Civilian companies will also toss you and your family to the curb just as fast. Right or wrong, it’s a fact of life.

We only wish we could 86 a whole bunch of people in the government. America would be much better off.