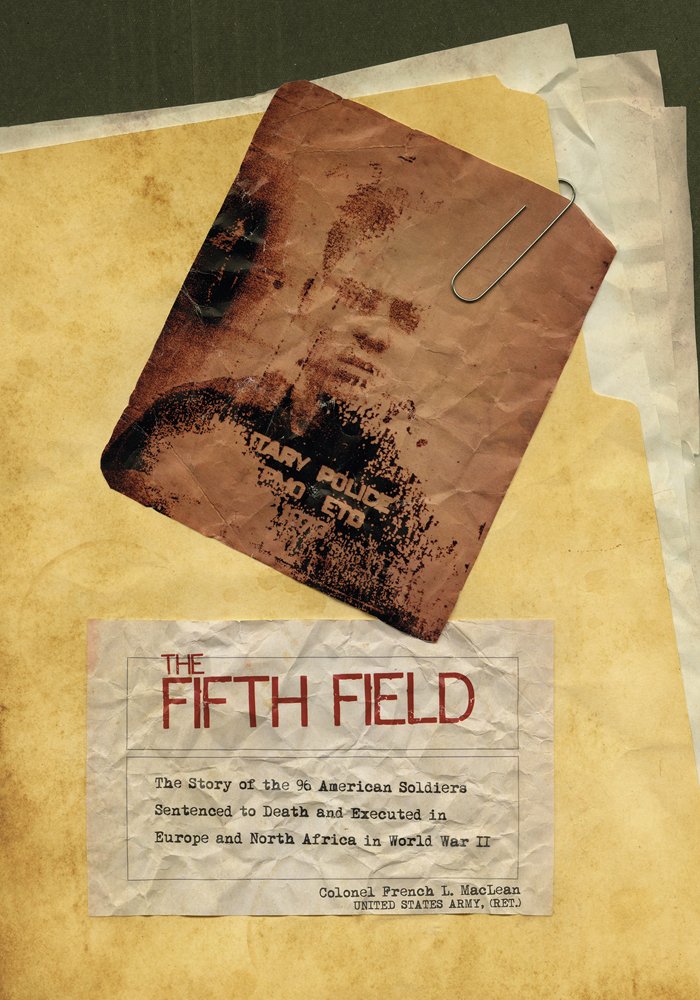 Title: The Fifth Field: The Story of the 96 American Soldiers Sentenced to Death and Executed in Europe and North Africa in World War II
ISBN: 9780764345777
Author: Colonel French L. MacLean
Genre: Non-fiction
Publisher: Schiffer Books
Unnamed Graves, a Secret Cemetery, Files Closed to the Public and Stored in “The Vault.” During World War II, in the North African/Mediterranean and European Theaters of Operation, 96 American soldiers were convicted by Army General Courts-Martial and executed for desertion, murder and rape. Their victims were 26 fellow American soldiers and 71 British, French, Italian, Polish and Algerian civilians. The executions were not ad hoc killings.

“THE FIFTH FIELD:
THE STORY OF 96 AMERICAN SOLDIERS SENTENCED TO DEATH AND EXECUTED
IN EUROPE AND NORTH AFRICA IN WORLD WAR II”

We’ve reviewed many a book in the years MilitaryCorruption.com has been online, but none quite like this.

Many students of WWII have read the riveting book entitled; THE EXECUTION OF PRIVATE SLOVIK by William Bradford Huie, which was first published in 1954 and made into a TV movie twenty years later.

This outstanding book from Schiffer Publishing not only tells us in great detail about the firing squad killing of that American Army soldier for desertion, it for the first time reveals the final moments of some 96 GI’s sentenced to death in Europe and North Africa during WWII.

The real eye-opener is the fact that more than 70% of the men executed were minorities. No officers. The vast majority of whom were Caucasian. Their crimes were all worthy of death – brutal rape, the murders of innocent women and children, etc. and murder of an officer. In the latter days of the war, it was far more likely that a Black soldier would die at the gallows or before a firing squad than to be killed by the enemy.

After the war, the Army searched for a suitable site to inter the remains of all 96 men. It chose a plot of land adjacent to – but technically outside of the World War I American cemetery of Oise-Aisne. The area is separated from the main cemetery by a high stone wall, concealed from view, and is closed to casual visitors, author French L. MacLean found the judicial files on the executed 96 were even harder to find – until now.

Highly recommended and rated at a full FOUR STARS. THE FIFTH FIELD is well-illustrated and a “must buy” for any serious World War II history buff. Schiffer turns out high-quality books. We’ll be reviewing more of their excellent selections in the near future.

You can purchase this very interesting book from book distributors such as Amazon or go directly to the publisher at www.schifferbooks.com.

The Fifth Field: The Story of the 96 American Soldiers Sentenced to Death and Executed in Europe and North Africa in World War II

Sometimes it appeared that a court-martial panel had a fundamental misunderstanding of its responsibility and mission. Such was the case of the GCM of Technician Fifth Grade James B. Sanders and ...