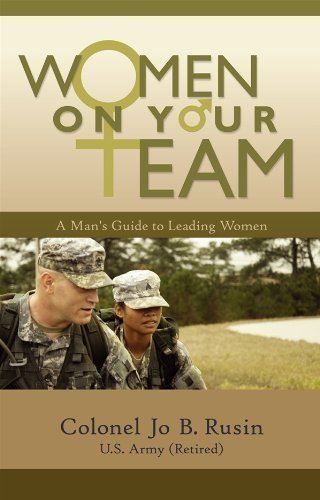 Title: Women on Your Team
ISBN: 0984074996
Author: Colonel Jo B. Rusin
Genre: Non-fiction
Publisher: Mentor Enterprises
Since the Revolutionary War, women have helped defend their nation and aid the front lines. However, the military is still very much a man's world with several misconceptions of the female Soldier. In a gender-integrated fighting force, one must throw out the common stereotypes of gender roles if one is to lead effectively. Colonel Jo B. Rusin U.S. Army (Retired) explores how the female Soldier differs from her male comrades.

We recall from world history that on May 10, 1933, student groups at universities across Germany carried out a series of book burnings of works the Nazi party declared had an “un-German spirit.” The largest of these book bonfires occurred in Berlin, where an estimated 40,000 people gathered to hear a speech by propaganda minister, Joseph Goebbels.

U. S. Army Colonel Jo B. Rusin wrote a book about basic leadership principles and the importance of integrating women into military units. But then, Air Force Major Catherine J. Tobin was apparently “offended” by the Colonel’s book. She filed a complaint which resulted in the banning of the Colonel’s book in base exchange retail stores on Army and Air Force bases all over the world.

We say the AIR FORCE had the book banned, but technically that’s not correct. AAFES had the book banned. AAFES (Army & Air Force Exchange Service) is the retailer on U.S. Army and Air Force installations worldwide and headquartered in Dallas, Texas. AAFES had no knowledge of any controversy until they were contacted by Air Force officials. AAFES ultimately followed “instructions” from the Air Force to quietly remove Col. Rusin’s book from all their affiliated stores.

That’s the little political game they play. The system is set up so the Air Force can have cover through “plausible deniability.” While technically the USAF did not officially ban the book, in essence, THE AIR FORCE REALLY DID BAN THE BOOK by either browbeating or directly ordering AAFES to remove Col. Rusin’s book from all of their stores.

In the military judicial world, it’s called unlawful command influence where jurors are threatened (influenced) by senior military commanders to render an “appropriate” verdict. In this case, the Air Force pressured AAFES to remove a book on leadership that an officer found offensive. The request was an order. If AAFES resisted, the Air Force just might find a new retailer to manage their base exchange stores. Losing that contract equates to a loss of millions of dollars. Even though subtle, the so-called “suggestion” from the Air Force presents a clear and present danger to the AAFES corporation.

This is the very thing that creates the “slime” factor that turns people off about the way our government/military works. They want to reserve the power to ban books they don’t agree with but do not want their fingerprints on any of it, just in case some pesky website calls out their book-banning ways.

The Air Force and AAFES were, no doubt cognizant of the negative optics that a book-burning event might create on the evening news. They chose a more subtle approach to control Free Speech by quietly removing Colonel Rusin’s book from the shelves. We are not sure if the book was also banned from naval and Marine Corps bases.

Again, what’s the difference between Nazi Germany and the United States Air Force? The answer is; not very much where thought-control “police” are concerned.

The Nazis brazenly burned the books in a big ceremony, while the United States Air Force stealthily removed them from their retail shelves with little fanfare. But, the objective was the same, censorship of the huddled masses. The goal was to deprive people of knowledge with which the bourgeoisie did not agree.

Censorship in any form is generally always a bad policy, whether done by Nazi brown shirts or by the United States government. This book removal reveals that our Air Force apparently has a problem with this Free Speech thing incorporated in the Bill of Rights. This tends to bolster the idea that military personnel only work FOR THE DEMOCRACY, and are NOT PART OF THE DEMOCRACY.

We can just hear the thought-control police in the Air Force say, ‘sergeant, you will think only what we want you to think, and nothing more. Now drop and give me twenty.’

Major Tobin said in her email, “I think the most troubling content considering the current DoD atmosphere is a chapter on how men can protect themselves from manipulation and false accusations of sexual harassment by women.” As a result of this complaint and perhaps other complaints that Tobin was able to conjure up, the Air Force and AAFES chose censorship over Free Speech.

Not many authors can say their book was “banned” from American military bases throughout the world. After all, it was a thought-provoking literary work about basic leadership principles, and NOT how to construct improvised explosive devices (IEDs) for Heaven sake. Even though the Air Force doesn’t want you to read this book, people can purchase it directly to the publisher, www.MentorMilitary.com, or Amazon.com.

Just make sure they mail it in a brown paper wrapper so as not to be seized as contraband. We also suggest those interested in reading this great little book may want to read it off-duty and off-base, to avoid any chance of being sent to prison.

It appears that in “The Borg Air Force” you could end up in legal jeopardy. For those of you old enough or young enough, “The Borg” is a fictional alien group that appears as recurring antagonists in the Star Trek franchise. The Borg are cybernetic organisms, linked in a hive mind called “The Collective.” In “The Borg,” anything you think would be instantly detected by the “collective” and you could be in deep kimchee.

We at MilitaryCorruption.com believe in Free Speech and will expose the thought-control police at every turn. We proudly give Col. Rusin’s book a FULL FIVE STARS and recommend all military officers and senior enlisted to read it and determine for themselves if Colonel Rusin’s book has value. We don’t need the government or Major Catherine Tobin to determine what is appropriate. As Americans, we have the right to think for ourselves whether we wear a uniform or not. Thought-control through the banning of books from the libraries or base exchange retail stores is reprehensible policy.

A SIDE NOTE: Many of the people on the MCC staff are “old school” and proud to be so. We remember when the first females were being allowed into combat roles and accepted into military flight schools. Our view of females in our military is a double-edged sword.

On the one hand, females introduce a needless distraction into units where even the slightest distraction can cause death. On the other hand, women bring forth a certain skill set that males simply do not have. Women are fabulous multitaskers.

In the fog of war, multitasking is almost always demanded of our warriors in leadership roles. This is why Col. Rusin’s book is so vitally important. We clearly remember when women first came aboard (to use a naval expression) and commanding officers would suddenly change when forced to mete out punishment for NJP offenses.

People up and down the chain of command who need to have a better understanding of how to deal with issues that are sometimes corrosive to morale should read this book. If you are in a leadership position of any kind, get this book to help fortify your understanding of what actually works and what doesn’t work when supervising females in the military.

Below is the email from the complainer (Catherine J. Tobin) to Col. Michael A. Vogel. It appears that Catherine Tobin is subtly threatening to contact U.S. Senators McCaskill and Gillibrand if something isn’t done about this horrible book on leadership that offended her. The United States Air Force, worried about offending people, took aggressive action and removed Colonel Rusin’s book from base exchange retail stores on Army and Air Force bases all over the world.

Sir,
I was in the BX this weekend in the clothing sales area where they sell books. I came across a book entitled, “Women on the Team; A Man’s Guide to Leading Women.” I find some of the content very offensive.

My first thought was to write to Senators McCaskill and Gillibrand — and I have several female officer friends who are willing to co-sign on it; however, then I thought better of it, as I would never want to bring any negative attention on Hanscom or the Air Force. I thought I should start by talking to our AAFES representative about it. Do you have any recommendations about who I should address about it?

Please let me know if you would like any specifics on this book. I think the most troubling content considering the current DoD atmosphere is a chapter on how men can protect themselves from manipulation and false accusations of sexual harassment by women.
V/R,
Cat

Colonel Jo Rusin served nearly a quarter century as a soldier and leader in the United States Army. Col. Rusin spent most of her career in troop units commanding Corps during the Gulf War. She also served in staff positions at all levels.

In addition to her leadership experience, Col. Rusin has the unique qualification of having served on five Department of the Army level selection boards, both officer and enlisted, Regular Army and Army Reserve. Col. Rusin graduated from the University of Kentucky, the U.S. Army Command and General Staff College, and the Air War College.

As a keen observer of human behavior, Col. Rusin understands what works and was does not when it comes to military leadership. Rusin spent most of her career in troop units, commanding three companies, two battalions, and a nondivisional support brigade in VII Corps during the Gulf War.

Women on Your Team

We recall from world history that on May 10, 1933, student groups at universities across Germany carried out a series of book burnings of works the Nazi party declared had an "un-German ...