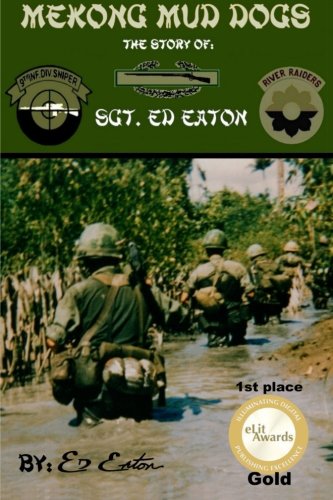 Title: Mekong Mud Dogs
ISBN: 978-0-6159-6518-5
Author: Edgar W. Eaton
Genre: Non-fiction
On a dark night in the Mekong Delta, young platoon sergeant Edgar Eaton's courage and self-sacrifice would mean the difference between life and death for his wounded comrades. This is the story of Army Sniper Edgar W. Eaton. Ed doesn't plan on serving as a sniper; the small-town Oregon boy hopes to become a combat medic when he enlists at age nineteen. Instead, he finds himself an infantryman in the unique Army / Navy Riverine Force…

With some books, the reader keeps hoping things will pick up and get more interesting, but the book: MEKONG MUD DOGS will have you riveted to each page as Ed Eaton takes the reader right to the battle. You actually think you are there in his platoon.

Unfortunately, the Vietnam War is one of those events in American history that many Americans want to forget. It was one of those ugly little political wars that many in Washington regretted getting into, and some wanted to continue indefinitely. Whether we like to admit it or not, war is big business. But, it was better said, described and defined in General Smedley Butler’s 1935 book entitled “War is a Racket.”

Can anyone imagine how much money was made by Bell Helicopter as one chopper after another was being shot down in Vietnam? And, that’s where the politics comes in. Many of those replacement helicopters were manufactured in Texas, and during much of the Vietnam War, Lyndon Johnson was President. You think it’s possible it was payback for something, perhaps campaign contributions? Sorry folks, we are so sick of the rampant corruption in Washington. We just had to throw that in.

Aside from all the political intrigue that got America in Vietnam and the backdoor deals that kept us in Vietnam, there were thousands of American sailors, soldiers and marines who were drafted or joined and felt they had a job to do. How and why they were there was unimportant, the fact of the matter was, they were there and had to make the best of a bad situation.

Edgar W. Eaton, more affectionately know as Sniper Ed was one of those guys who decided that while he was there he would do the very best he could for his country and his commander Army Captain Mike Perkins. The way he describes his experiences puts the reader in the center of the action. Each page is captivating as Eaton describes the battles and skirmishes he had with the enemy and sometimes people on our side.

Duty, honor and country runs in the Eaton family. Ed Eaton’s great grandfather John Eaton was the son of Levi Eaton who was mortally wounded at the Battle of Franklin while serving with the 44th Missouri Infantry during the American Civil War.  John and his brothers traveled to the great Northwest after the Civil War settling in Southeast Washington. The wet and soggy Northwest is where Ed calls home today.

Right around page 163 of Mekong Mud Dogs, Eaton describes how the helicopter he was on was hit by enemy fire and went down hard, nearly killing all those aboard. Capt. Perkins was all busted up and could not be easily moved. Another escort helicopter came in for the rescue as the enemy was closing in for the kill.

Eaton was ordered to get on the rescue chopper and to leave Capt. Perkins to fend for himself, but Eaton’s absolute loyalty to his commanding officer would not allow him to do that. He said, “I will not let him die alone,” and jumped off the skids to fight till the last bullet with his badly injured commanding officer. With enemy troops, moving in strength to kill or capture those pesky Americans, most soldiers would have said, ‘sorry captain, I hope you understand, but I’m the fuck out of here.’

The vietcong guerrillas numbering about 40 or so, split up and began to zero in on the downed helicopter where Capt. Perkins and Ed Eaton planned to make their last stand. What happened after that was an extraordinary example of heroism and skill as Ed Eaton fended of dozens of enemy troops closing in for the kill.

How it all happened, and how they got away is just as captivating, but you’ll have to get the book to find out. We strongly encourage anyone, including socialistic-minded millennials who hate the military and hate America to read this great book. (and we won’t hold our breath waiting for them to read it) Perhaps when these millennials finally achieve their long-desired socialistic-utopia, they may have a change of heart one day and pray for people like Ed Eaton to save them from poverty and disease and hyper-inflation like that in Venezuela today.

It’s sad there are so many Americans who don’t have any appreciation of those who went before them and fought for our country. They disrespect our flag and our anthem and hate the very country that gave them all of the freedoms they enjoy and sometimes abuse. One of these days, they may figure it out, that our military is the best part of America. It’s comprised of people who love the country and volunteered to wear the uniform and be ready to fight for American interests all over the world, but we digress.

We loved reading “Mekong Mud Dogs,”  but deeply saddened to know that Eaton did not receive the Medal of Honor (MOH) for his incredible courage and bravery on the Mekong Delta. Capt. Mike Perkins, both right after the event, and in recent years submitted all sorts of paperwork and evidence of Eaton’s heroic action for the Army to recommend Eaton for the MOH. As it is with Washington D.C. it’s all politics all the time.

It’s generally thought that because the person who headed up the Army’s Awards Board was offended when Capt. Perkins lost his patience on the phone with ridiculous government food-dragging. Apparently, the chairperson personally decided, or convinced the awards board that Ed Eaton did not merit the MOH. Yes, sometimes important things in life will get just that petty.

Anyone who reads this great little book, will understand why so many people feel it’s been a terrible travesty that Ed Eaton has not been awarded the Medal of Honor. Mr. President, it’s still not too late to recognize this man’s selfless act of bravery while he still lives.

While we continue to wait for the United States Army to correct what is a truly an example of gross injustice by failing to recognize Ed Eaton’s conspicuous gallantry in battle, now would be a great time to read Mekong Mud Dogs. It’s a captivating first-hand account of incredible bravery in the face of overwhelming odds. By his dauntless fighting spirit, unrelenting aggressiveness and forceful leadership throughout his enlistment in the Army, Sgt. Eaton inspired his men to heroic efforts, enabling them break the back of an attack by an enemy moving towards them in strength. Through his courage and bravery, the lives his commanding officer and others were saved. The Army needs to correct a terrible injustice and recommend Sgt. Eaton for the Medal of Honor. He earned it and deserves it.

We give this fabulous book, “Mekong Mud Dogs” a strong FIVE STAR rating, and proud to do so.

With some books, the reader keeps hoping things will pick up and get more interesting, but the book: MEKONG MUD DOGS will have you riveted to each page as Ed Eaton takes the reader right to the ...