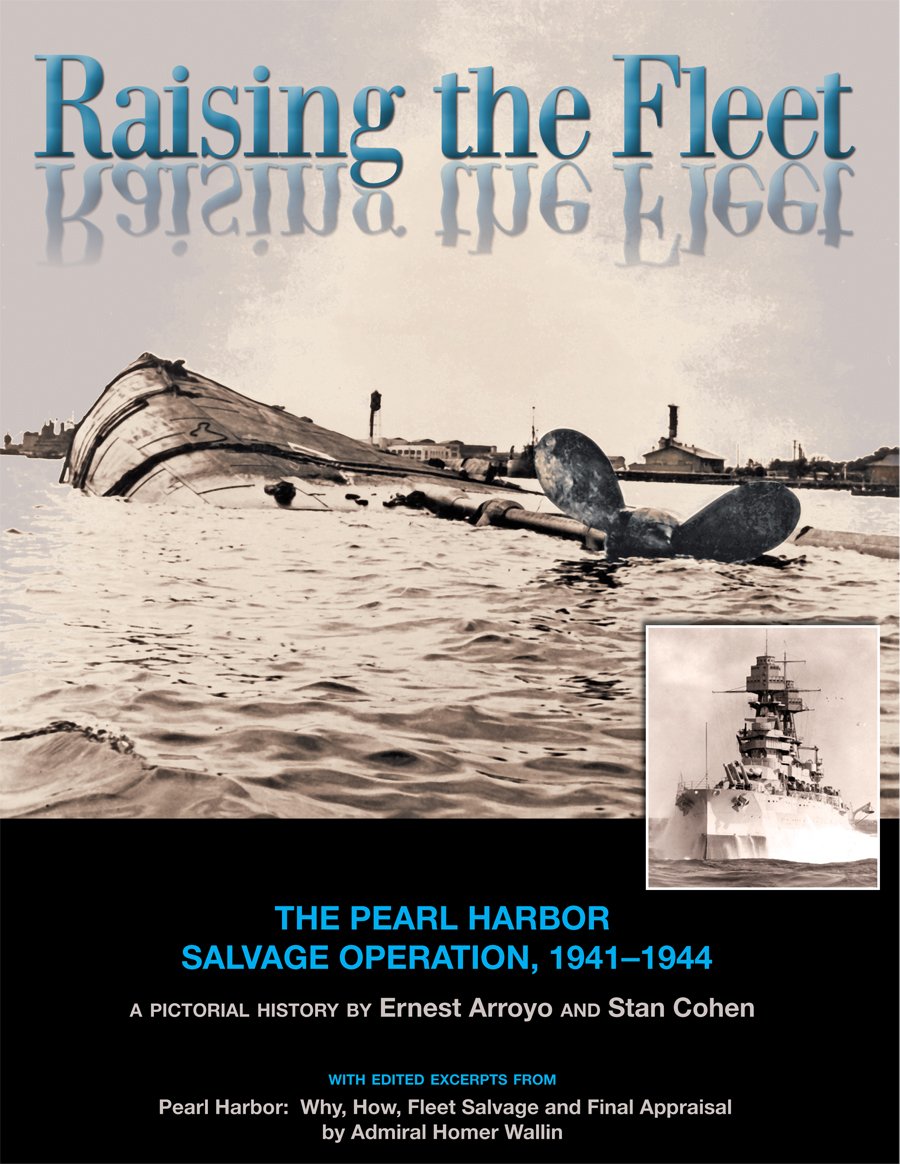 Title: RAISING THE FLEET & ATTACK ON PEARL HARBOR
ISBN: 978-1-5751-0087-6
Authors: Ernest Arroyo, Stan Cohen
Genre: Non-fiction
Publisher: Pictorial Histories Publishing
One of the greatest maritime salvage operations in US history took place for three years after the devastating attack by the Japanese at Pearl Harbor on December 7, 1941. Raising the Fleet follows the operation on each ship sunk or damaged from refloating to moderate to intensive repairs to putting the ships back into the fleet, with hundreds of period photographs and extensive captions. The three ships not salvaged, the USS Arizona, Oklahoma, and Utah…

TERRIFIC NEW BOOKS ENTITLED “RAISING THE FLEET” & “ATTACK ON PEARL HARBOR” – AUTHOR STAN COHEN OF PICTORIAL HISTORIES PUBLISHING CO. IN MISSOULA, MONTANA HAS CREATED THE QUINTESSENTIAL PHOTO RECORD OF THIS MAMMOTH TASK – HIS “ATTACK ON PEARL HARBOR” LARGE SOFTCOVER TOME HAS 500 PIX – MORE PHOTOS THAN EVER PRINTED BEFORE BETWEEN TWO COVERS – WE GIVE THIS PROLIFIC AUTHOR OUR HIGHEST RATING – FIVE STARS

When Pearl Harbor was attacked on December 7, 1941 outstanding history writer Stan Cohen was a mere lad of three years old. But by June 6, 1944, the little boy who grew up in the hills of his native West Virginia, tells us here at MCC that he remembers the excitement of the radio bulletins when Allied forces invaded Hitler’s Europe and landed on the beaches at Normandy.

We are pleased to highly recommend Cohen’s Pictorial Histories Publishing Co. in Missoula, Mont. to our many military readers. Be sure to go to their web page and see the fascinating list of some 150 books in print that are available.

The topics vary from Civil War uniforms to WWII in Alaska. Stan has a special place in his heart for the Aleutions, having been there several times himself, and his pictorial histories of the Japanese invasion there in the early days of the war is, in our opinion, the best and most complete account ever written.

Be sure to check out another great Stan Cohen book: A GLORIOUS PAGE IN OUR HISTORY (the Navy’s big victory at Midway);

Stan’s books are of the highest quality and belong in every library and school in America. It’s not very often we can award our highest rating to one of the flood of review books publishers send us, but in this case, we rank ATTACK ON PEARL HARBOR and RAISING THE FLEET five stars – a “must buy” recommendation.