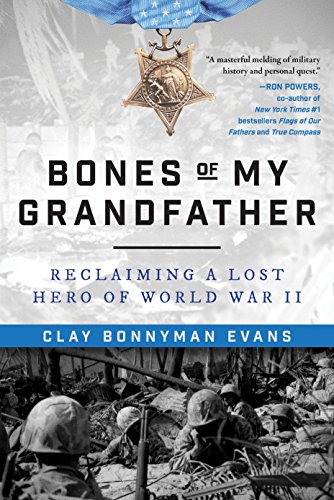 Title: Bones of my Grandfather: Reclaiming a Lost Hero of WWII
ISBN: 978-1-5107-3061-8
Author: Clay Bonnyman Evans
Genre: Non-fiction
Publisher: Skyhorse Publishing
In 2010, having become disillusioned with the U.S. government's half-hearted efforts to recover the "lost Marines of Tarawa," Bonnyman's grandson, Clay Bonnyman Evans, was privileged to join the efforts of History Flight, Inc., a non-governmental organization dedicated to finding and repatriating the remains of lost U.S. service personnel. In Bones of My Grandfather, Evans tells the remarkable story of History Flight's mission to recover hundreds of Marines long lost to history in the sands of…

Normally, when the remains of service personnel are discovered, the Defense POW/MIA Accounting Agency (DPAA) contacts the most direct relative they can find. The relatives are told that remains have been found which could be their missing relative, but a positive ID must be made before a death certificate can be issued and before the remains are released. DPAA then requests tissue samples to run a DNA tests to be absolutely positive the remains do indeed belong to their missing relative.

Once a positive ID is conclusive, arrangements are made to repatriate the remains back to America for an official release to a family member. Clay Bonnyman Evans was not going to sit patiently waiting for a phone call from the government concerning the remains of his grandfather 1LT Alexander (Sandy) Bonnyman, USMC.

Clay connected with a non-profit organization that is much more aggressive than DPAA to find our lost service members. Clay Evans made several trips to the South Pacific Atoll of Tarawa at his own expense and worked right along with other searchers in the blistering heat that bakes the island all year long.

His grandfather, 1LT Bonnyman was no ordinary Marine. President Harry S. Truman bestowed the Congressional Medal of Honor posthumously on Bonnyman for his extraordinary efforts during the Battle of Tarawa against the dug-in Japanese defenders.

The Marines were catching seventeen kinds of hell when they hit the beach. One of the many problems were the bomb proof shelters that protected the Japanese during the naval bombardment that preceded the beach assault.

These bunkers were several feet thick with concrete and steel. A direct hit from a naval bombardment shell still protected the inhabitants within, and the Marines were having difficulty even getting close to the bomb proof shelter. This is when Sandy Bonnyman took command and came up with a plan to flush the recalcitrant Japanese from the fortification.

According to Sandy Bonnyman’s Medal-of-Honor Citation:

Determined to effect an opening in the enemy’s strongly organized defense line the following day, he (Bonnyman) voluntarily crawled approximately 40 yards forward of our lines and placed demolitions in the entrance of a large Japanese emplacement as the initial move in his planned attack against the heavily garrisoned, bombproof installation which was stubbornly resisting despite the destruction early in the action of a large number of Japanese who had been inflicting heavy casualties on our forces and holding up our advance.

Withdrawing only to replenish his ammunition, he led his men in a renewed assault, fearlessly exposing himself to the merciless slash of hostile fire as he stormed the formidable bastion, directed the placement of demolition charges in both entrances and seized the top of the bombproof position, (and with a flame thrower) flushing more than 100 of the enemy who were instantly cut down, and effecting the annihilation of approximately 150 troops inside the emplacement.

Assailed by additional Japanese after he had gained his objective, he made a heroic stand on the edge of the structure, defending his strategic position with indomitable determination in the face of the desperate charge and killing three of the enemy before he fell, mortally wounded.

Fast forward 72 years, Sandy’s grandson Clay Bonnyman Evans was actually standing there on the Tarawa Atoll when forensic anthropologist Kristin Baker was brushing away the sand from the right side of a skull. Several Marines had been buried together in a trench. Kristin noticed there were gold fillings in the teeth, and shouted out excitedly for all other searchers to hear. The gold fillings were very important, because 1LT Sandy Bonnyman was several years older than the average Marine in his unit, and was one of only two Marines in that unit who had gold fillings in their teeth.

On May 29, 2015, Kristin Baker shouted out the discovery of the gold fillings and Clay came running over to personally view the discovery. They both realized that his long-lost grandfather had finally been found, and the tears welled up. Never mind the government had told the Bonnyman family for decades that Sandy had been buried at sea. Was it just a clerical error, or an out and out lie; we will never know.

This remarkable book, “BONES of my GRANDFATHER” is filled with interesting facts and describes the frustrating experience the Bonnyman family had, in dealing with the DPAA. As an example, one of DPAA’s finest was a Dr. Gregory Fox who purportedly was drinking heavily every night and apparently said to a coworker that he was not there to find any ‘fucking Medal of Honor winner.’ Complaints were filed with DPAA in Washington, but they defended their friend and colleague Dr. Fox. Can anyone spell, S-W-A-M-P?

It got so bad, that Clay Bonnyman Evans lost all trust and confidence in the DPAA, and seriously planned to place his grandfathers remains in his suitcase, then scurry off the island to ensure his grandfather was returned to his home and family in Knoxville, Tennessee. Even though his trust in the DPAA had hit rock-bottom, he was talked out of secretly removing his grandfather’s bones and chose instead to allow the governmental process to run its course.

We had the honor of actually attending the funeral for Sandy Bonnyman in Knoxville, Tennessee. Except for a few boneheaded former Marines acting as crowd-control volunteers who apparently thought they were guarding Ft. Knox, the funeral detail conducted a ceremony that greatly honored Sandy Bonnyman’s service to his country.

BONES of my GRANDFATHER is a well-researched, wonderful book that we can whole-heartedly recommend. This book easily receives FIVE FULL STARS from the staff at MilitaryCorruption.com.

Bones of my Grandfather: Reclaiming a Lost Hero of WWII

1st. Lt. Bonnyman had inspired his men to heroic effort, enabling them to beat off the counterattack and break the back of hostile resistance in that sector for an immediate gain of 400 yards ...