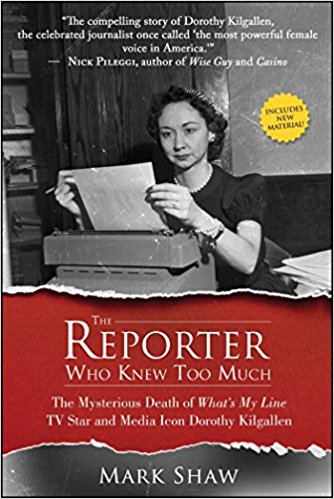 Title: THE REPORTER WHO KNEW TOO MUCH
ISBN: 978-1-68261-097-8
Author: Mark Shaw
Genre: Non-fiction
Publisher: Post Hill Press
Through discovery of never-before-seen videotaped eyewitness interviews with those closest to Kilgallen and secret government documents, Shaw unfolds a “whodunit” murder mystery featuring suspects including Frank Sinatra, J. Edgar Hoover, Mafia Don Carlos Marcello and a "Mystery Man" who may have silenced Kilgallen. All while by presenting through Kilgallen's eyes the most compelling evidence about the JFK assassinations since the House Select Committee on Assassination’s investigation in the 1970s.

THE REPORTER WHO KNEW TOO MUCH: THE MYSTERIOUS DEATH OF “WHAT’S MY LINE” TV STAR AND MEDIA ICON DOROTHY KILGALLEN by Mark Shaw

This is an absolute must-read for anyone interested in the assassination of President John F. Kennedy in Dallas on November 22, 1963.

Dorothy was the premier investigative reporter of her time. She was the only news-person to get an exclusive interview with alleged Mob hit-man Jack Ruby in his Dallas jail cell.

Many assassination investigators feel she got a little too close to finding out who was really behind the slaying and thus paid with her life.

Did Kilgallen really commit suicide with sleeping pills or was she “suicided” by someone who wanted to be sure she didn’t break the JFK assassination story “wide open,” as Dorothy boasted to friends she was about to do.

We won’t exactly know the identity of the killer by the time we reach the end of the book, but we will be certain this was no accidental death.

THE REPORTER WHO KNEW TOO MUCH

... some believe Kilgallen committed suicide. However, a third possibility remained, that she was murdered, that the women called "the most powerful female voice in America" was silenced because ...

The term “love triangle” generally connotes an arrangement unsuitable to one or more of the people involved. One person typically ends up feeling betrayed at some point. Within the context of monogamy, love triangles are inherently [ … Read More]

ACCOMPLICE, CECILY AGUILAR HELPS HER BOYFRIEND IN THE VANESSA GUILLEN MURDER CASE – WHEN GUILLEN THREATENED TO REPORT SEXUAL HARASSMENT, SHE IS MURDERED AND DISMEMBERED – ARMY WAS IN NO HURRY TO SOLVE THE CASE – TOOK 2.5 MONTHS BEFORE THE CIVILIANS FINALLY CRACKED THE CASE

Thirty-seven (37) year old Aviation Ordnance Chief  (AOC) Thomas Traylor, USN was found dead behind the wheel of his pickup truck on a Sunday morning in December 1998. He was assigned to the Naval Air [ … Read More]