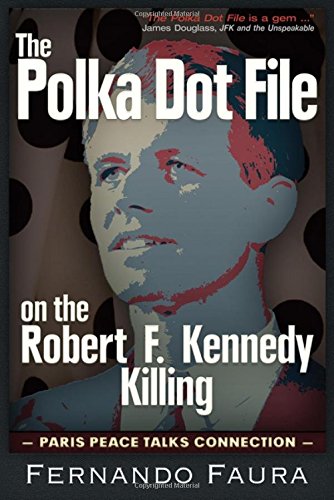 THE POLKA DOT FILE ON THE ROBERT F. KENNEDY KILLING
by Fernando Faura

As we sometimes do, we provide our readers a review on interesting books we find in our massive library. Sometimes, our book selection does not involve military corruption which is normally our primary focus, but may be captivating none-the-less. This book review does have a thin connection with the military.

We’ve often called TrineDay publisher Kris Millegan “the most courageous book publisher in America.” This latest book is a good example. Millegan puts his life on the line when he publishes titles that have been squelched or suppressed elsewhere. Please check this Oregon-based beacon of truth and fearlessness out. Contact info is just above.

The term “polka dot” refers to the dress a woman witness to the Robert Kennedy assassination had on that June night in Los Angeles exactly 50 years ago. What information did she possess as to who was behind the slaying? Read the book.

It describes the day-to-day chase for the mystery woman in the polka-dot dress. The book comments on but does not dwell on the police investigation and reads like a detective thriller instead of an academic analysis of the investigation.

THE POLKA DOT FILE incorporates actual tapes made by an important witness. and introduces the testimony of witnesses not covered in other assassination books. Check out veteran newspaper reporter Fernando Faura’s theory on who was behind the slaying.

This one is easy. Absolutely four stars.

THE POLKA DOT FILE ON THE ROBERT F. KENNEDY KILLING

Seconds after the shooting stopped, a young women in a poka-dot dress ran out of the kitchen, passed Sandra Serrano, a Kennedy campaign worker. The woman shouted, "We shot him, we shot him." ...