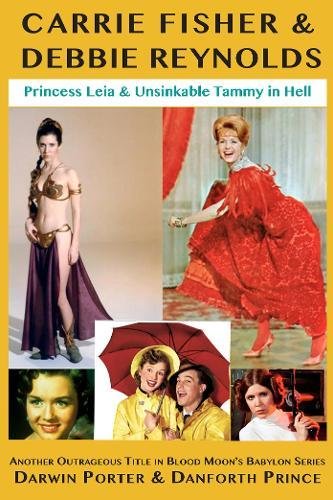 Title: CARRIE FISHER & DEBBIE REYNOLDS
ISBN: 978-1-936003-57-0
Authors: Danforth Prince, Darwin Porter
Genre: Non-fiction
Publishers: Blood Moon Productions, Ltd., Ltd.
Born in a shanty in El Paso, Texas, Debbie, a Texas tomboy, endured a life of poverty―jackrabbit every night for dinner―until she moved to California. Blossoming into a young beauty, she won the title of Miss Burbank, which led to a movie contract. A fabulous book that we heartily recommend.

Hold onto your hats, the “bad boys” of Blood Moon Productions are back. This time, they have an exhaustively-researched and highly readable account of the greatest mother-daughter act in the history of show business: Debbie Reynolds and Carrie (Princess Leia) Fisher..

Loaded with never-before published revelations about former USO Troup entertainer Debbie (as America’s Sweetheart during the Korean War) we’ll read about rat Eddie Fisher leaving his beautiful young wife for Elizabeth Taylor, only to be dumped by the beauty queen when she later took a shine to British film actor Richard Burton.

We get to know what bad luck Debbie had with subsequent husbands who left her deeply in debt. Debbie loved actor Glenn Ford and the feeling was mutual. And here between the covers of this 628 page tome is the answer to the often-asked question: just what was the actual nature of the very close relationship between Debbie and BEWITCHED television series star Agnes Moorhead.,

If celebrity gossip and inside dirt is your secret desire, check out this book. It will not disappoint. We rate it worthy of four stars.

Major Glenn MacDonald rates this book 4.0, and strongly recommends it for everyone, in or out of the military. Debbie Reynolds was involved in several USO tours, many in the military are familiar.