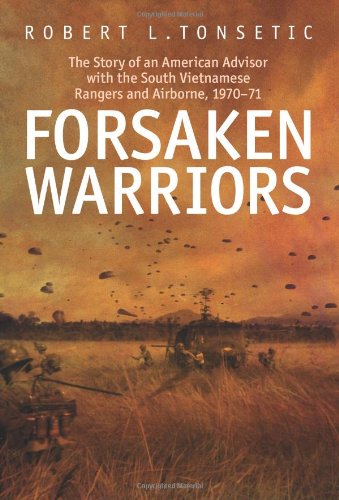 Title: Forsaken Warriors
ISBN: 978-1-935149-03-3
Author: Robert L. Tonsetic
Genre: Non-fiction
Publisher: CASEMATE Publishers
"Forsaken Warriors" is a personal memoir of the author's service as a US Army advisor during the end-stages of America's involvement in Vietnam. During the period 1970-71, the US was beginning to draw down its combat forces, and the new watchword was Vietnamization. It was the period when the will of the US to prosecute the war had slipped, and transferring responsibility to the South Vietnamese was the only remaining hope for victory.

FORSAKEN WARRIORS:
THE STORY OF AN AMERICAN ADVISOR WITH
THE SOUTH VIETNAMESE RANGERS AND AIRBORNE

Once America’s combat casualties in the Vietnam War decreased, public attention also disappeared, leaving an entire period of that conflict still vague in history.  In fact, a few select U.S. soldiers stayed behind during the publicized American withdrawal, devoting all their expertise to helping the South Vietnamese stand alone against the continued Communist onslaughts.

This book is a personal memoir of the author’s service as a U.S. Army advisor during the end stages of America’s involvement in Vietnam.  during the period 1970-71, the U.S. was beginning to draw down its combat forces. and the new watchword was “Vietnamization.”  It was the period when the will of the U.S. to prosecute the war had diminished, and transferring responsibility to the South Vietnamese was the only remaining hope for victory.

Robert Tonsetic served as a U.S. Army advisor to South Vietnamese Ranger and Airborne units during this critical period.  The units that the author advised spearheaded several campaigns in South Vietnam, Cambodia and Laos, as U.S. combat units were either held back or completely forbidden from fighting.

Often outnumbered and outgunned, ARVN’s elite Ranger and Airborne units fought Viet Cong and North Vietnamese units in some of the most difficult terrain in Southeast Asia, ranging from the legendary U Minh Forest and Mo So Mountains in the Mekong Delta, to the rugged hills of southern Laos..

The role of the small U.S. advisory teams is fully explained in this narrative.  With little support from higher headquarters, these teams accompanied the Vietnamese units on highly dangerous combat operations over which they had no command or control authority.  When U.S. advisors were restricted from accompanying South Vietnamese forces on cross-border operations in Cambodia and especially Laos, the South Vietnamese forces were badly mauled, raising concerns about their readiness and training, and their ability to operate without their U.S. advisors.