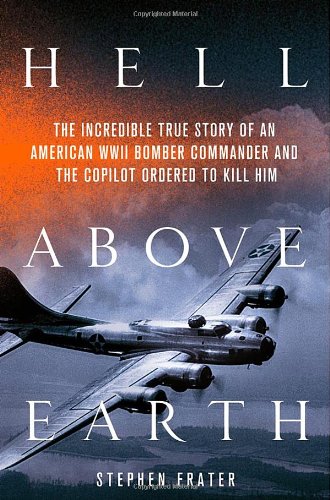 Title: HELL ABOVE EARTH
ISBN: 978-0-312-61792-9
Author: Stephen I. Frater
Genre: Non-fiction
Publisher: St. Martins Press
Hell Above Earth tells an unforgettable story of two World War II American bomber pilots who forged an unexpected but enduring bond in the flak-filled skies over Nazi Germany. But there's a twist: one of them was related to the head of the Luftwaffe, Reich Marshal Herman Goering, and the other had secret orders from FBI Director J. Edgar Hoover, to kill him if anything went wrong during their missions.

HELL ABOVE EARTH:
The Incredible True Story of an American World War II Bomber Commander
and the Copilot Ordered to Kill Him

The U.S. air battle over Nazi Germany in World War II was hell above earth. It lasted three years and cost the lives of 125,000 Allied airmen, including 26,000 Americans from the U.S. Army’s Eighth Air Force in England.  For bomber crews, every day they flew was like D-Day, exacting tremendous amounts of emotional uncertainty and trauma.

Some men, such as twenty-year-old U.S. Captain Werner Goering, accepted this, even thrived on and welcomed the adrenaline rush.  They knew that death could come in a variety of ways: an unlucky flak burst, Luftwaffe fighters that could appear anywhere at any time, or pilot error when flying less than twenty feet apart.

Werner Goering was an experienced pilot.  He was also the nephew of Hermann Goering, leading member of the Nazi Party and commander-in-chief of the Luftwaffe.

When Werner qualified to become a bomber commander in 1942, J. Edgar Hoover issued a top-secret order to ensure that if Captain Goering’s plane was downed for any reason over Nazi-occupied Europe, some one wuold be there in the cockpit to shoot Goering dead.

The FBI and the American military would not  prevent Werner from serving his American homeland in war, but neither would they risk the propaganda couo that his desertion, or even his live capture, would represent for Nazi Germany.  So in 1943, FBI agents fanned out across the United States to find a man capable and willing to shoot Werner in the cockpit, and one who could then get the plane back home.

That man was Jack Rencher, a tough, insular B-17 instructor in Yuma, Arizona who also happened to be one of the Army’s best pistol shots.  That Jack and Werner became unlikely friends is just one more twist in one of the most incredible untold tales to come out of World War II.