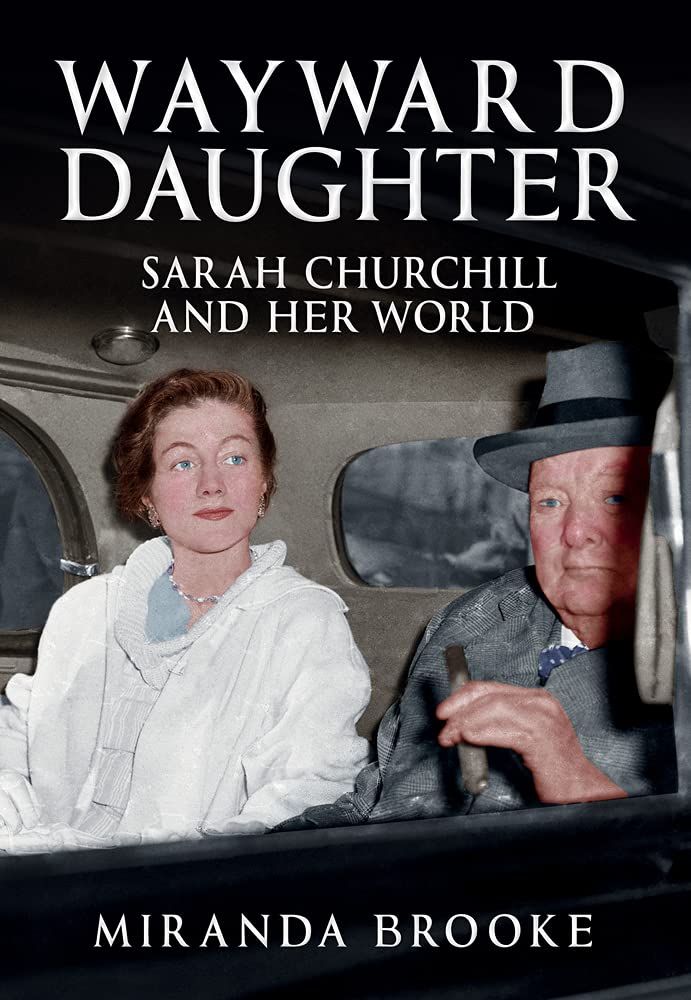 Churchill histories are frequently staid and fawning. ‘Wayward Daughter’ by gifted author Miranda Brooke is intellectually honest, and poignantly displays history which is fair to all parties involved in the life of Sarah Churchill.

Much of this book is, of course, about Sir Winston Churchill’s daughter Sarah. But, until the publication of this exemplary look into history, this side of Churchill family history was unknown to most everyone.

This stellar literary work breaches the large gap left by rival books. It’s an insight into life at the very heart of the Churchill family: relationships between child and parent, between siblings and that between husbands and wives.

Was Sarah Churchill truly, a “wayward daughter?” There was a moment in 1936 when she indeed was: breaking the norms expected of her class and running away to New York with an actor. For a fleeting moment she was Broadway’s latest debutante, cashing in on the Churchill name.

We all do daft things when we are young! Interestingly, we find that in both her parents’ genes is the gift to perform.

Show business and her Pied Piper – Vaudeville Star Vic Oliver (who she marries) – are Sarah’s obsessions. Miranda Brooke has done extraordinary research, clinging to the truth in all things. Comic relief comes in this 1930s period when Churchill had no political power despite being a key international celebrity.

Loving both the Empire and mother country, he seems rather like a Brexiteer decades before Brexit. Brexit, for those who don’t know was “Britain’s Exit” from the European Union. This excellent book describes how Churchill embarrasses the British Broadcasting Corporation.

There was no ‘woke control to Major Tom’ back then. Readers will discover that what transpires in the father-daughter relationship, to some degree, is the changing of Winston Churchill himself.

PIMPED OUT TO KEY AMERICANS

The year 1940 was truly Britain’s Finest Hour. At the time only a bit of barbed wire and Churchill’s speeches separate the Brits from sure Nazi domination. Bizarrely, in 1933 Sarah had come close to dining with Hitler. Yet by 1941 Churchill’s daughter’s sense of duty made her leave acting to fight the cause and honor her family name.

It was a time when the only American Winnie could rely on was Sarah’s comic husband, whose cheesy jokes warmed the nation . . . that’s before Winston and Clementine threw in the towel and pimped out both their daughter-in-law and daughter to key Americans: ‘Mr Lend-Lease’ – Averell Harriman – and the Ambassador to the Court of St James sent by Roosevelt – John G. Winant.

Miranda Brooke’s view is that Sarah instigated the relationship with Winant. Secrecy characterized her life thereafter. The author says the ‘Special Relationship’ between Britain and the USA got more special on account of Churchill’s daughter.

Sarah loses herself in parent-hero-worship. She’s not alone because Winant is equally obsessed by her father. We learn of her work within the Intelligence Section of Britain’s RAF during World War II. She was a ‘photographic interpreter’ – painstakingly sifting information from aerial photos taken by spies in the sky.

It was a peculiar time. ‘Uncle Joe’ Stalin was directing some kind of East-West exchange thing between Sarah and his own daughter. Churchill was near to being taken in: ‘Give-em a little love. We can tame the enemy,’ he thought.

He hoped gentlemen’s rules might apply. What was unleashed was land grabbing, pain and desperation. A voice had told him all along: ‘those bloody Russians’ should be kept in check. Later on, he came to the opinion (privately) that nuking them might solve the problem.

“A SHADOWY CREATURE AT THE SIDE OF POWER”

Whilst great focus is placed on Sarah’s desire to make it in theatre, film and the Arts, a substantial section reveals her unique role during World War II – a shadowy creature at the side of power.

There are angles that readers of MilitaryCorruption.com will be alert to whilst in a WW2 context, such as State-endorsed secrecy, for example, hiding State knowledge of Hitler’s V2 weapons and ‘economy with the truth’ when it came to sacrifices suffered by British civilians in order to hide the fact that Britain was au fait with enemy air strategies – having cracked the Enigma Code.

Finally there is the immediate masterminding of crisis situations such as Winant’s tragic death. It is revealing to read about the changed brokering of power between Britain and the USA in the Cold War.

Sarah’s assistance to the Poles (early victims in the Second World War to Nazis and Stalin) is an eye-opener as is when she entertained Nazi-hunters.

Between writing poems (she was extremely gifted here), she danced (once with Fred Astaire) and dated men with a death wish. In America some of the older generation remember Sarah.

PLAYING A PART IN THE DEVELOPMENT OF TELEVISION

She played her part in the development of American television half a century ago. Sadly, a public fall from grace in the late 50s damaged her. This might have been a set-up by the FBI. Stop us if you’ve heard this before!

People born with the name Windsor, Marlborough and Churchill have a fishbowl existence from birth. You can’t err or make achievements quietly. If drink has become a demon you are walking a tight-rope.

A few years on and Sarah is alone, suffering the first of several traumas. She even spends a week in prison. Like a soldier she returns to the field getting flak for having had all the advantages and not hacking it.

The author Miranda Brooke has painstakingly tracked down friends and gone through the entire archives. In our view, the author has been fair to Sarah and her family. Sarah is a great historical figure. She had true grit. She was able to, unbelievably, survive successive tragedies. She was also a true star.

This book is hugely entertaining. Some thought Lawrence of Arabia was gay, but here he’s getting quite handsy with the debs. Roll on the decades and Sarah is fulfilling her desire to roam by climbing on the saddle with a pack of Hell’s Angels. Read on . . .

This book about Sarah Churchill targets anyone who has failed at anything but wishes to make a comeback. Who else but Sarah better personifies how to take things on the chin with good grace! In an era of quick-to-be-offended, self-righteousness we could learn from The Wayward Daughter Sarah Churchill who just went her own way.

Miranda Brooke’s previous publications include a biography of Renee Houston. She has lived and worked in Europe, the Middle East, and Asia, and carried out original research on four continents when compiling her biography of Sarah Churchill.

This is an excellent book by and excellent author that gives Americans a glimpse behind the curtain when America and Britain stood shoulder to shoulder taking on the maniacs of the world.

If you love to read, or know someone who loves to read, get this fabulous new publication. It’s a wonderful look into world history.