In today’s incendiary political climate, it’s virtually impossible to get a Republican (a real Republican) and a Democrat to agree on anything, that is until the dubious court martial of Major Clarence Anderson III.

On Monday, 23 July 2018, a Democrat Senator and a Republican Congresswoman set aside their political differences to demand answers from the Secretary of the Air Force, on the injustice involving Major Anderson. Senator Doug Jones (D-AL) and Congresswoman Martha Roby (R-AL) approached Secretary Heather Wilson, demanding answers regarding a series of questionable actions by the United States Air Force.

Major Anderson at the time, was a Squadron Commander stationed at Holloman Air Force Base, New Mexico. When Anderson discovered his wife was having an affair, Anderson filed for divorce resulting in a bitter and contentious legal battle for custody of their child. Major Anderson was awarded custody of their daughter from the civilian court. The child custody decision of the court so infuriated his x-wife and her mother, that they decided to try their hand with military judicial system.

Major Anderson states that his x-wife levied an outrageously false complaint with military authorities at Holloman AFB charging the major with sexual assault.

The evidence against Anderson at the court martial was based almost entirely of his wife’s word against his, the classic she-said, he-said dispute. There was no physical evidence, no eyewitness testimony, and no forensics. Civilian law enforcement officials testified at his court martial proceeding, saying they could find no evidence the Major had ever committed any crime.

There was even evidence presented from Anderson’s previous command that corroborated what the civilian cops stated in their testimony; Major Anderson had no infractions of any kind. But, the testimony given under oath by sworn peace officers, and documentary evidence from his prior command just wasn’t good enough for the United States Air Force.

To make matters worse, the Air Force Judge Advocate General corps (JAG), wanted to please their taskmasters in Congress. Many Members of Congress, were kowtowing to a “MeToo” mentality and leaned on the military to bring people to justice in matters of sexual assaults and rape. All they needed was just the accusation, and the military would deliver the conviction to make Congress happy.

It’s clear that for many years complaints from women about sexual assault and rape were frequently ignored or downplayed. People with money, power and fame, like Bill Clinton, Bill Cosby, Harvey Weinstein were raping and sexually assaulting women with complete impunity. Because of it, there was a predictable backlash and the pendulum swung hard in the opposite direction. Now all women are to be believed regardless of what the facts might reveal.

The political climate that created the MeToo movement exerted enormous pressure on politicians and political appointees who in-turn disbursed that pressure to organizations they controlled like the military. This pressure from Congress made the “politically correct” military move to produce results, meaning convictions regardless of what the facts revealed.

Air Force Judge Advocate General (TJAG), Lieutenant General Richard Harding, was quoted in an earlier court martial of another individual, that “victims are to be believed and their cases referred to trial.” His statement appears to have become tacit policy for all Air Force JAG officers.

What Air Force JAG officers heard was, ‘victims are to be believed, the accused is to be ignored and all cases of this nature shall go to trail. And by God, that trial had better result in a conviction.’  Such statements by the TJAG rises to the level of unlawful command influence.

The Air Force ignored all evidence that favored Major Anderson, and found him GUILTY in April 2015. Major Anderson felt he probably would receive a more fair application of the law if he chose a judge only trial. The judge not only convicted Major Anderson, but sent him to prison to boot. Obviously, that did not work out so well for Major Anderson. What happened next has some calling for Air Force General Mark Welsh (Ret.) and others’, to stand for grade determination.

In September of 2015, Congresswoman Martha Roby requested the Air Force to look into Anderson’s case. Roby advanced a claim of evidence that was presented to her of witness tampering. The claim since validated, was that Anderson’s mother-in-law paid his wife’s lover a large sum of money (testimony later revealed $100K) in exchange for his false testimony about when their illicit love affair began. It would seem this would constitute witness tampering and suborning perjury.

The Air Force lacked legal jurisdiction to thoroughly investigate this evidence against any of the involved parties, but could have requested assistance from civilian law enforcement e.g. FBI – something which Air Force officials allegedly declined. To ensure the judicial proceeding was fairly constituted and conducted, the Air Force could have taken many steps to protect the rights of the accused. In light of the evidence, and lack thereof, Major Anderson’s trial is clearly suspect.

In October 2015, the Air Force responded to Roby’s inquiry informing her that there would be a post-trial hearing giving her assurance that Anderson’s claim of witness tampering would be permitted to bear on his trial result. Specifically, the Air Force told Congresswoman Roby that the military judge at the post trial hearing may rule on any motions that Anderson’s defense counsel submits.

This instruction mirrors military court martial instruction RCM 1102(e) which states at a post-trial hearing “the military judge shall take such action as may be appropriate.” The Air Force failed to turn over as evidence this Congressional response to Congresswoman Roby, and to Anderson’s defense team.

The assurance submitted to Congresswoman Roby turned out to be utterly false. At Anderson’s post-trial hearing, the Air Force asserted that since the trial record was already authenticated, the military judge lacked authority to thoroughly evaluate the evidence of witness tampering, nor could he order a new trial.

This decision contradicted what was told to Congresswoman Roby, and contradicted “Rules for Courts Martial” (RCM) 1102(e) which permits and orders the military judge authority to evaluate evidence to include ordering a new trial. Anderson’s defense team couldn’t even argue the government originally conceded to RCM 1102(e) because the Air Force failed to disclose that Congressional response submitted to Roby, to Anderson’s defense team.

But finally, and most distressingly, the judge ruled that the evidence of witness tampering that he did not permit to be evaluated, even if it occurred, “probably” would not have made a difference in the trial outcome, and therefore would be considered harmless. This is the same judge who ignored all the aforementioned evidence that pointed to Anderson’s innocence at his original court martial. It looks to us as if the judge is trying to protect his own ass.

The issue had also grabbed the attention of Alabama Senator Doug Jones. Senator Jones submitted a Congressional Inquiry in January 2018 that the Air Force has yet responded to. This lack of respect for Members of Congress is telling. There are many in the military high command who frankly had success in ignoring probes from Congress, much in the same way the DOJ ignores requests from Congress today. 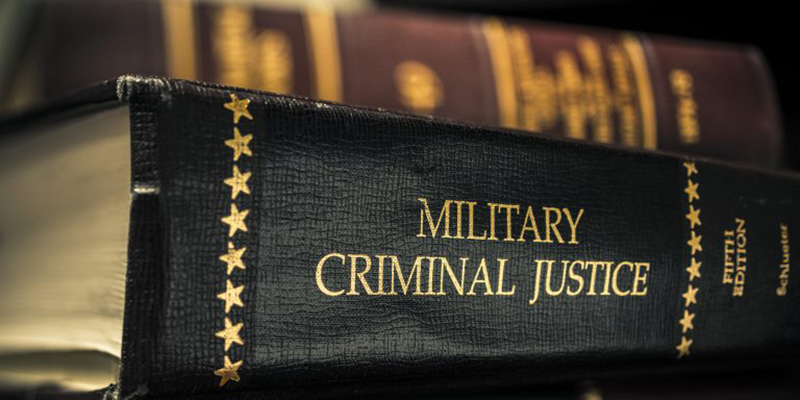 Many senior military members view our civilian leaders as just people passing through, and if they drag their feet long enough… the whole matter will just go away. This policy is summed up by military commanders when they ask, “Do you believe in the hereafter?” and regardless of what anyone responds, they say… “I’ll be HERE, long AFTER you’re gone.”

This case is disgraceful and an affront on the United States Constitution. There is maybe no other case that more accurately reflects the Air Force’s complete embrace of corrupt politics. This trial should have never happened, instead it stands. The Anderson case is proof positive the military system of justice is a complete joke.

People like Major Clarence Anderson are subjected to kangaroo-court proceedings, while gutless tap-dancing flag-ranking officers (admirals and generals) continue to mislead Congress with zero accountability. And, because of the military’s two-tier justice system and policy of “different spanks for different ranks,” flag-ranking officers who break the law themselves, are allowed to retire to avoid prosecution.

OUR “BULLSHIT METER” PEGS OUT AGAIN

Our Bullshit Meter hit the peg again on the Major Anderson case. We began to wonder what the hell happened for an Air Force major to be slammed down so hard over what some would characterize as more than flimsy evidence. Was the judge a closet White Supremacist? Has the MeToo mentality so infected our military courts as to render them impotent in providing a fair and impartial decision? Is UNLAWFUL COMMAND INFLUENCE become so ingrained in our military that people can no longer see the damage they are doing?

Air Force Secretary Wilson, former Major Anderson is simply asking that you right the ship of state in the Air Force. Conduct a complete and thorough investigation and do something that most in Washington abhor… hold people accountable for the egregious injustice perpetrated upon Clarence Anderson.

If JAG officers are indeed being pressured to charge and convict in order to satisfy the judicial blood lust by Members of Congress; put an end to it and go back to an old school concept of not only “Equal Justice Under Law,” but Fair and Impartial Justice Under Law.

23 JUL 2018 – Letter from Rep. Roby and Senator Jones to the Secretary of the Air Force

FEB 2017 – Report on Sexual Assault Investigations in the Military

PAST ARTICLES ON MAJOR CLARENCE ANDERSON

HE WAS SACRIFICED ON THE ALTAR OF POLITICAL CORRECTNESS

Believe it or not, as an active duty member of the United States military, you could be imprisoned for the rest of your life because military leaders are attempting to ingratiate themselves with Congress by [ … Read More]

Army Goes After One of its Own

LT. COL. STUART SCHELLER COMES FORWARD TO SAY WHAT IS ON THE MINDS OF MANY. HE PUT EVERYTHING ON THE LINE FOR TRUTH. BEING PRINCIPLED & HONORABLE COMES AT A HEFTY PRICE IN TODAY’S NEW WOKE MILITARY!

MilitaryCorruption.com has received large numbers of emails from people about the wrongful incarceration of Lt. Col. Stuart Scheller. Many of the emails were from people calling themselves retired Marines. The majority came to the defense [ … Read More]