It appears that our open borders have infected the Marine Corps. Most all of the Marines who have been ensnared in this tangled web, were at the rank of E-2 to E-4. There have been so many arrests, the Camp Pendleton Brig is filled to capacity. The Marines had to use squad bay #6 where the guards hung out, to provide space enough for new inmates that were caught in the human smuggling and drug sting operation.

One reader wrote in… “I wonder if all those Marines who were arrested for human trafficking will subpoena Sen Ron Wyden in their defense. After all, if a US Senator can use his influence to play a coyote and illegally bring a pregnant Mexican woman into the US and not face arrest, why can’t they do the same?”

The guards at Camp Pendleton Brig stand twenty-four hour watches and need a place to catch some sleep time. The guards had to surrender their nap room area to accommodate the onslaught of new inmates arriving at the brig. This was not good for morale of the guards. Heaven help those poor inmates now, with cranky prison guards that can’t get any rest because the Marine Corps arrested a den of smugglers, drug dealers and scoundrels. 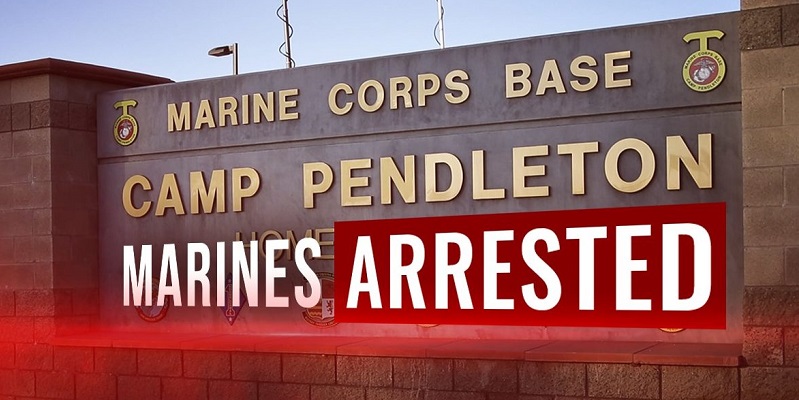 We were expecting to hear something like a sergeant major yelling, “Marines to be arrested: Center, MARCH!” but the real life version of what happened on Thursday when 16 Marines from 1st Battalion, 5th Marine Regiment were arrested was far less dramatic.

A viral Facebook post from a former Air Force service member claimed to have the story, which said that the sergeant major of the unit, Sgt. Maj. Matthew Dorsey, essentially faked an awards ceremony before having the Marines nabbed by NCIS. It didn’t really go down that way, according to Maj. Kendra Motz, a spokeswoman for 1st Marine Division.

“It didn’t happen that way at all,” Motz told Task & Purpose on Friday. “There was no ceremony involved in that whole thing.”

Instead, it was much more like a sergeant major holding a clipboard calling out names, Motz said. With his battalion of roughly 1,200 Marines in front of him, Dorsey rattled off the names of 16 Marines between the ranks of private first class and corporal. They then broke ranks and ran to the front.

“They lined up in front of the formation,” Motz said. “Then once everyone was lined up, they were arrested.”

There was no ceremony, nor red folders. It was just your garden variety mass arrest of more than a dozen Marines, intended to strike fear into everyone else’s hearts to not do dumb shit, such as “alleged involvement in various illegal activities ranging from human smuggling to drug-related offenses,” as the division said in its initial press release of the arrest.

Motz said none of the Marines who were arrested have yet been charged.

The arrest of the 16 can be traced back to the case of two Marine infantrymen, Lance Cpl. Byron Law and Lance Cpl. David Javier Salazar-Quintero, who were pulled over and arrested by Border Patrol on July 3 — along with three undocumented immigrants in the backseat — as they were allegedly trying to make a quick buck shuttling people from Mexico into the United States, according to a federal court complaint first reported by Quartz.

According to the July 3 complaint, Law told Border Patrol that he was an active-duty Marine and dimed out Salazar-Quintero as the organizer of the smuggling operation. “Law stated that last night, Salazar called and asked him if he was willing to make $1000.00 USD picking up an illegal alien,” the complaint said.

On July 2nd, Law said they both traveled to Jacumba, California while being guided “via cell phone instructions from an Unknown Mexico number,” the complaint said. They then picked up a single immigrant and brought him to a McDonald’s parking lot in Del Mar, it continued.

The next day, Law said Salazar called him for another job. This time, they both went to the same area and picked up “three illegal aliens” off the I-8 freeway.

Salazar, meanwhile, said Law introduced him to smuggling through a recruiter. Salazar also admitted to coming to Jacumba to pick up undocumented immigrants on four different occasions, the complaint said.

The three immigrants who were arrested identified Law as the driver of the car that picked them up. Two of them said they were going to pay $8,000 to be smuggled into the U.S. The arrest of other Marines in 1/5 came after NCIS examined the phones of Law and Salazar-Quintero.

Another great point of view comes from TheCommonSenseShow.com who believes “The Camp Pendleton Affair Demonstrates Every Federal Agency Has Been Infiltrated by the Deep State.”

Marine Corps Colonel Dan Wilson and his wife Susan took in a family down on their luck. The woman they took in turned out to be a pit viper and filed charges against Colonel Wilson saying he had molested her six-year-old daughter. There was no evidence, but that didn’t stop the Marines from sending Wilson off to prison.

The Criminal Appeals Court felt the conviction and imprisonment of Colonel Dan Wilson was based on insufficient evidence, and unanimously voted to reverse the lower court’s decision with extreme prejudice. (“extreme” is our word, not the court’s). But, in a vindictive move, the military has chosen to keep Wilson incarcerated for an indeterminate amount of time until they figure out how to deal with the appeals court’s decision.

Here’s a novel idea, why not release him from prison immediately, especially since they need the space at the Camp Pendleton Brig. Colonel Dan Wilson is certainly not a flight risk, because he is interested in obtaining his back pay and retirement. A guy like that does not jump on a jet and fly to bum-fuck Egypt.

Wilson is no ordinary Marine Corps colonel. His father was a Presbyterian minister and a missionary. His mother is a medical doctor. Before entering the military, Dan Wilson was driving a truck filled with medical supplies and medicine for his parents in the Sudan. He learned to speak Swahili, Arabic and African. Colonel Wilson possesses two master degrees and is a gifted writer.

Colonel Wilson’s mother is now 92 years of age, and the moment he is released he plans a trip to Washington State to see his mother. Hopefully, the military has enough wisdom to realize their stupid mistakes in the Wilson railroad job and release him immediately so he can see his mother before she passes away.

The only thing worse than imprisoning an innocent man, is putting a man to death for something he didn’t do. But in some ways, wrongful imprisonment is worse than carrying out a death sentence, because once dead the pain is gone for the wrongfully convicted. An innocent man finds himself pacing his cell for hours, days, weeks, months and years at a time, making the pain and agony of being caged continue seemingly without end. The United States Marine Corps should be deeply ashamed for the pain they inflicted on this remarkable leader of men.

MilitaryCorruption.com has contacted President Trump’s comment line to request the immediate release of Colonel Wilson, but who knows how much of the comments that come through his White House switchboard he actually sees. At this point, Colonel Wilson and his family are just waiting for military prosecutors to get over it, and realize they screwed up royally. And the saga continues…

Naval Academy in Yet Another Drug Scandal

SAILORS GETTING AS HIGH AS THE AIRCRAFT THEY LAUNCH – WERE SOME WORKING ON OR NEAR THE SHIP’S NUCLEAR REACTOR? – HALLUCINATING SAILORS, WHAT CAN GO WRONG?

Oh, say it ain’t so! What could go wrong when sailors responsible for the nuclear reactor of an aircraft carrier are using the classic hallucinogenic drug of the 60s called LSD? It wasn’t that long when [ … Read More]

THE OUT-OF-CONTROL ARMY LIEUTENANT COLONEL AND THE PATHETIC CHAIN OF COMMAND THAT REFUSED TO BECOME INVOLVED – THIS ETHICALLY CHALLENGED LTC IS WORKING IN THE PENTAGON WITH A TOP-SECRET CLEARANCE – THE ARMY CAN BE PROUD OF THIS CLOWN OFFICER.

Kimberly was the perfect little officer’s wife, devoted, talented and smart. She graduated with an accounting degree from the University of Maryland on an Academic Fellowship with a 3.9 GPA. But even Einstein could have [ … Read More]