Is the American military going to hell in a handbasket? Or is this just a passing fad, that we will get through one day. We categorically reject the notion that every White person is a racist just because of their skin color.

Right away, people who see the picture of General Milley with pink hair, think we are Gay bashing. This is nonsense. We embrace the Barry Goldwater philosophy, “we don’t care if you are straight, we only care if you can shoot straight.” Gays have always been in the military and have served very honorably. We have no problem with that at all.

The problem we have is the distraction this WOKE initiative creates within the military. Instead of concentrating on making our military members great warriors, we are worried about retrofitting all of our Navy ships with a third restroom to be used by those who do not identify as either male or female. Wouldn’t the soaring costs to retrofit 200 Navy ships be better spent on better body armor for those stepping over IEDs.

The point is, General Milley and those of his ilk should get out of the social engineering business and concentrate on building a lethal military machine. In other words, do your damn job. Create policies and an atmosphere where by all members are treated equally. These policies already exist, but military commanders don’t always live up to these ideals.

Every time a flag-ranking officer is allowed to resign to avoid prosecution, people are not being treated equally.

When Solicitor (District Attorney) Dan Johnson of Richland County, South Carolina steals thousands of dollars from the Air National Guard as a Major in the Army and JAG officer, then given an Honorable Discharge, people are not being treated fairly.

When Army Major Andrew Higgins is thrown out of the Army with an OTH because he caught people in his chain of command involved in all manner of misconduct, people are not being treated fairly. The VA quickly figured out what happened and thumbed their nose at the Army giving Major Higgins an Honorable Discharge (for VA purposes).

When Airforce Major Clarence Anderson is wrongfully convicted and thrown in prison for three years because the military wanted to be politically correct, people are not being treated fairly.

When Colonel Dan Wilson is sent to prison for five years over the coerced testimony of a six-year-old child… when the appeals court reverses the court martial, the military resorts to administrative remedies, busting him in rank and throwing him out with an OTH… people are not being treated fairly.

When Army Major General Grazioplene rapes his own daughter for a decade, then is given a pension and an Honorable Discharge, people are not being treated fairly.

Being sensitive to racial problems is a good thing. But, being hypersensitive to race where everyone is a victim demanding reparations, is not good at all. Some wonder if there is a cancer that grows in the upper echelons of the American military which needs to be excised.

At first, we didn’t think so, but now we are starting to lean in the direction of getting rid of people using our military as a halfway house to fix societies problems. You do not fix racism with more racism. That won’t work. It polarizes us and divides us. That’s not good at all.

GENERAL MARK MILLEY
HAS GOT TO GO FOR OTHER REASONS


In 2019, MilitaryCorruption.com did an article about how General Milley helped to protect a sexual predator. The General was completely wrong to protect this predator, but everyone went along to get along, because after all, he is the HMFIC.

This idea the military has zero tolerance against sexual assaults is nothing but a big joke and it’s all because of the so-called “leadership” at the top. Now Milley has a bigger political horse to ride.

He wants to be good friends with György Schwartz, AKA: George Soros, along with all the liberals so he can score a major appointment after he retires from the military. The Navy calls it “showing your true colors.”

Just when we though this stupid policy of calling all people racists was an isolated incident, a Lieutenant Colonel in the Army pops up to allegedly say, “if you’re a White male, you’re part of the problem.” Again, we are not certain if the Lt. Col. actually said those words or not.

At first we thought it was just something taken out of context and twisted, but the military’s behavior told us otherwise. The military chose to go silent and hunker down.

It’s the old circle the wagons technique that has worked so well for the Army since the days of the cavalry. Did the Army launch an investigation, so they can tell people… “sorry, we have no comment. The matter is currently under investigation.”

Then, when things quiet down in about two years, the so-called investigation will be dropped or say they found nothing of a consequential nature. After Lt. Col. Rhodes had his little meeting where he allegedly said this stupid crap, the text chatter began… 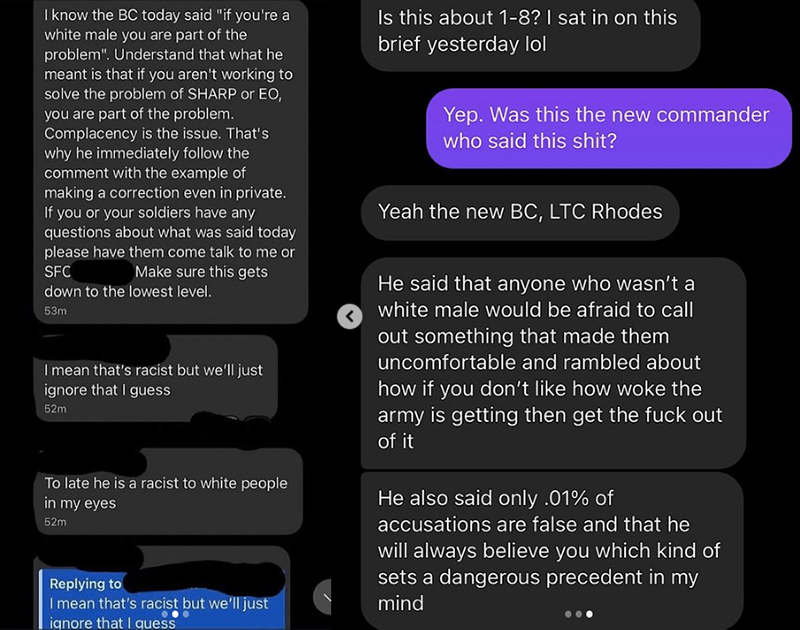 We have to wonder. Where will we be at the end of all of this stupidity. Is it just a passing phenomenon? We remember way back in the day when Hare Krishna disciples were attempting to put flowers in the barrels of guns and walking up to military members in the airport to pin a flower to their uniform.

The military needs to avoid politics at all costs and concentrate on the best and most lethal way to defeat an adversary. If this WOKE thing is oozing into our military, it may very well be weakening America’s ability to address foreign aggression. At the very least it’s a major distraction.

We warn our young men and women to consider some other line of work. There are many ways to serve your country without serving in the military.

According to the Uniform Code of Military Justice (UCMJ), an officer can receive two years in prison and a felony conviction for buying an enlisted person a beer and calling them by the first name. The military calls it fraternization. Contrast that to a Major General who repeatedly raped his own daughter and is rewarded by the Army with a pension and Honorable Discharge.

We may be wrong, and we pray that we are, but our military is appearing to be nothing more than a big petri dish used for culturing bacteria and other microorganisms that will ultimately erode American military power. Whether we like it or not, we have been chosen to be the world’s policeman.

Oops that’s right, defund the police may also mean an inevitable degradation of the military impeding its ability to help police the world.

Robert C. O’Brien’s 2016 book “While America Slept” plays off of the title of John F. Kennedy’s 1940 book, “While England Slept,” which told the story of the events of the 1930s leading up to World War II. Because nations never took the threat seriously, Adolf and his henchmen rose up to threaten the world costing 50 million lives.

If we sleep, if America fails to police the world, the first thing that will be adversely affected are the sea lanes for international commerce. Then look for Iran to finally obtain a nuclear-tipped missile. Then grab your ass and kiss it goodbye.

If the American voter wants a WOKE government so they can get lots of free stuff from Washington and defund our police, then they will get all that comes with it. They will reap the whirlwind which will bring enormous suffering and misery.

It turns out that Free Speech is just a concept that our government can ignore when it’s convenient to do so. The IRS now gets to harass and deny any “religious” person. It was OK when Lois Lerner did it, so it’s apparently IRS policy they have fully implemented.

It all boils down to accountability, or the lack thereof.

Not enough government bureaucrats are being sent to prison. The chances of all-out civil war looms if the basic foundations of America are destroyed. Socialism has never worked and never will. If these stupid ideas and policies are converted into acceptable norms, hyperinflation will eventually set in, making the dollar of the United States pretty much worthless.

Laugh if you want to, but this is really starting to get serious when Americans no longer trust their government or their pathetic news media.

If you didn’t get the whole point of this article… we will clarify it. General Mark Asshole Milley has got to go. You know that he will get a sweet deal from the “friends” he’s made while employed with the government.

Then, purge military ranks of anyone who advances Critical Race Theory in an effort to get promoted to higher rank. Get rid of the brownnosers and bootlickers. Embrace and promote true leaders among the ranks. And, start court-martialing flag-ranking officers instead of allowing them to retire to avoid prosecution.

Then and only then, will this downward decline in our military be pulled out of its current death spiral.

DID THE MENSTRUAL CYCLE OF OFFICERS ABOARD THE USS FITZGERALD BECOME A CONTRIBUTING FACTOR IN THE JUNE 2017 COLLISION THAT CLAIMED THE LIVES OF SEVEN AMERICAN SAILORS?

America has become so polarized and choked by political correctness, that we find ourselves unable to address topics that maybe need investigating or just a simple discussion. We are way past the question of whether [ … Read More]

Believe it or not, as an active duty member of the United States military, you could be imprisoned for the rest of your life because military leaders are attempting to ingratiate themselves with Congress by [ … Read More]

MARK IT DOWN ON YOUR CALENDARS! BY RECOMMENDING CAPTAIN CROZIER TO BE REINSTATED IN HIS OLD JOB, THE NAVY IS ADMITTING IT MADE A MAJOR MISTAKE. OF COURSE, THEY WILL USE THE FORMER ACTING SECNAV AS THE FALL GUY.

Senior Navy officials have recommended to Defense Secretary Mark Esper that Capt. Brett Crozier, the commander who was fired after warning that the crew of the coronavirus-stricken USS Theodore Roosevelt was in danger, be restored [ … Read More]