Corruption is virtually everywhere in the world, more in some places than others. Sadly, the American military is not exempt from corruption and may have more of it that most organizations. The military has been given the power to deny prying eyes and deal harshly with whistle-blowers under the guise of “national security.”

Most people in the contiguous 48 states think of Hawaii, they think of the Navy and Pearl Harbor. When we think of corruption and Hawaii, we think of the Fat Leonard scandal involving ship support contractor Glenn Defense Marine Asia (GDMA), a subsidiary of the Glenn Marine Group operating out of Hawaii.

The Washington Post called the Fat Leonard scandal “perhaps the worst national-security breach of its kind to hit the Navy since the end of the Cold War.”At the heart of the scandal was Glenn Defense Marine Asia, a firm run by Leonard Glenn Francis, a Malaysian national known as “Fat Leonard” for his then over 350 pound weight.

Francis provided at least a half million dollars in cash, plus travel expenses, luxury items, and prostitutes to a large number of U.S. uniformed officers of the United States Seventh Fleet, who in turn gave him classified material about the movements of U.S. ships and submarines, confidential contracting information, and information about active law enforcement investigations into Glenn Defense Marine Asia.

Francis then “exploited the intelligence for illicit profit, brazenly ordering his moles to redirect aircraft carriers to ports he controlled in Southeast Asia so he could more easily bilk the Navy for fuel, tugboats, barges, food, water and sewage removal.”

The Navy, through GDMA, even employed divers to search harbors for explosives. He also directed them to author “Bravo Zulu” memos, which is an informal term for a letter of commendation from the Navy given to civilians who have performed outstanding services for the Navy, in order to bolster GDMA’s credibility for jobs “well done”.

The fraud and waste, along with associated cover-ups continues, only in another branch of the service – the United States Army. Major General Ronald P. Clark and his “associates” from the 101st Airborne Division continue to look the other way while the fraud goes on unabated.

COL Kevin Williams, the former Secretary of the Army’s Aide continues to get special treatment and despite a near relief-for-cause was kept in his Brigade Commander’s billet – a position he earned without merit and two-years-early (Below-The Zone).

Insiders say Williams used his connections in DC to return to Hawaii once again. He had the same against issues during his Battalion Command in Army Hawaii. “Slick” Williams they call him – has problems wherever he goes.

Major General Clark and his wife earmarked $150,000 for the division ball; charging individuals $135/ticket, and charging couples approximately $250 a pop. Company Wine/Dine – regardless of cost to taxpayers and troops.

Mrs. Clark (the general’s wife) demanded a first-rate ball, and paid for it with exorbitant ticket prices, and what could not be paid for by the attendees, the rest was paid for by the taxpayers.

We hear that Colonel Kevin “slick” Williams and his buddy Colonel Brendon Raymond still in the process of fending off tax evasion charges from their tenure in the 101st Airborne. And the Hawaii soap opera continues… $60 billion in fraud and waste discovered by Major Andrew Higgins, just last month alone.

Not a good idea to report massive fraud in the military. Was he awarded a silver star for saving the taxpayer’s 60 billion dollars? No, the Army told Higgins to, “resign or else.” Major Higgins continues to stand alone in the face of an overwhelming backlash. Talking truth to power in the military is just not a smart thing to do.

The generals do not want to be told they are committing acts of fraud. But, Higgins is Army strong and receives support from people here and there. Interestingly enough, his strongest support comes from an overwhelming anti-LTC McDonough sentiment on the base and from readers at MilitaryCorruption.com.

Major General Clark’s subordinate commander, Colonel Kevin “Slick” Williams, had $750,000 million in unchecked funds. But, three quarters of a billion dollars unaccounted for wasn’t nearly as high a priority as getting LTC Jennifer McDonough out of town.

Scandal-ridden LTC McDonough will be quietly ushered off the Hawaiian Islands for the Army War College in Carlisle, Pennsylvania.

For some reason, McDonough’s abrupt departure never made it onto the commanding general’s latest Facebook post. The 2nd Brigade Combat Team is the laughing stock of the United States Army.

The Division hurriedly ordered LTC McDonough to get out of Hawaii and report to the War College in June 2019. As it is with many fraud cases in the military, the perpetrators are usually promoted or given better assignments after demonstrating supreme ineptitude and occasional malfeasance.  The Army policy is to “move ’em up, after they mess up.”

Major General Ronald P. Clark continues to protect Colonel Kevin “Slick” Williams and LTC McDonough because they are not just his subordinates, they are his friends. You can receive protection if you live on Island FOC, because the only fairness in the Hawaiian Island chain is on “FOC” Island…. “Friends of Clark” Island

Construction across Army Hawaii uses $200-million in taxpayer money; there is no limit to spending for a so-called “cash strapped,” US Army Hawaii. New buildings are popping up everywhere at Big Army Hawaii. We wonder if the Inspector General (IG) has given any thought to investigating how those contracts were dolled out. 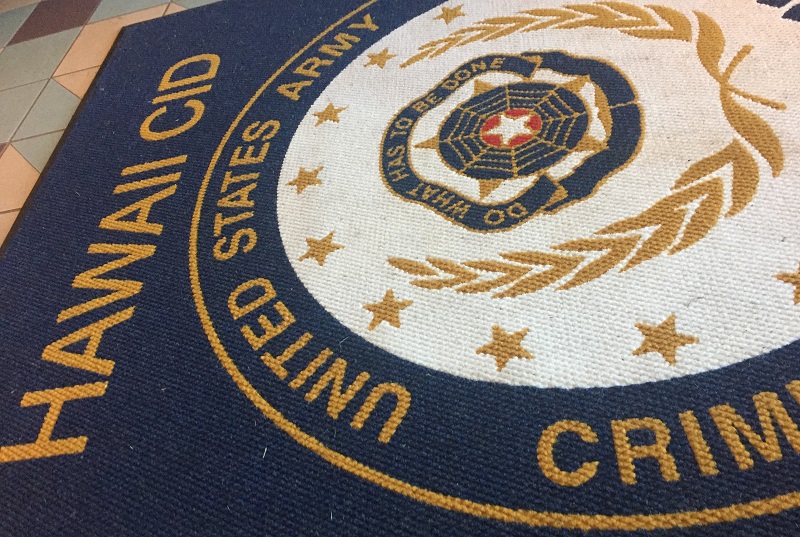 It’s the same old story – the United States Senate and the Criminal Investigative Division (CID) already know the level of corruption occurring at Big Army Hawaii. So, to make it look like they are interested in preventing fraud, twenty-two (22) of Army Hawaii’s units are/were under a financial review.

Major General Clark attacked Major Andrew Higgins when he reported fraud, waste and abuse of taxpayer dollars. Now, they are claiming they turned it all around. But, did they consider the cost of the cake for Mrs. Clark during the extravagant division ball.

Major General Clark runs his command just like he and his wife planned the divisional ball, no expense is too much, no extravagance is too high. Ostentatious spending is the order of the day. Let’s spend every freeking dollar we get our hands on and worry about it later.

And talk about an over-loaded and bloated staff. Big Army Hawaii has three deputy commanding generals, a chief of staff, and tons of support personnel to fill Army headquarters. The arrogant waste of taxpayer money in indescribable.

Outside of spending billions of dollars, nobody seems to know the mission of Army Hawaii. Morale is low, drug use is high, discipline is in the toilet. If the Chinese make their move in the Pacific theater, they will have us for lunch. Political correctness and the extravagantly lavish lifestyle for MG Clark and his inner circle is a train wreck waiting to happen.

For example: LTC Brian, “The Stain” Hayes, Headquarters Commander… “lost” 1,000 rounds of ammo, $1 million in property, and even is alleged to have cheated to be selected as the Army Athlete of the Year in 2014. And, no one seems to care.

Hayes is part of that protected class because he says, “yes, sir” to whatever the general wants, and is good buddies with LTC Jennifer “don’t know what I’m doing” McDonough.

Wake up Pentagon. End the Army Hawaii vacation. Consider helping the poor troops trying to eke-out a living, not the greedy general officers smoking cigars and playing grab-ass in the officer’s club.

Despite rumors of swingers clubs, wife swapping and various inappropriate relationships in Army Hawaii, the 25th Infantry Division continues to focus their attack on whistle-blowers like Major Higgins and others who step forward to report fraud, waste and abuse.

Major General Ronald P. Clark through his henchmen have repeatedly demanded that Major Higgins resign. As far as we know, Higgins as refused to do so. They continue to railroad whistle-blowers, similar to how the Navy treated people attempting to report massive fraud associated with the Fat Leonard scandal.

Colonel Kevin “Slick” Williams was suspected of having an inappropriate relationship involving a female Captain. The response was, “she was just a friend.” Right! How many year-group 2013 captains from West Point are on Brigade Staffs hanging out with the Boss? Not too many, because it’s inappropriate.

Major General Ronald P. Clark apparently endorses this activity by looking the other way. There was a temporary duty (TDY) trip conjured up for the 2nd Brigade to Fort Polk just for the purpose of patronizing a popular strip club. It was a party trip paid-for by the American taxpayers.

An Army captain was forced to drive officers to the strip club so they could tuck paper money into the G-string of the dancers on stage. Kevin “Slick” Williams sent troops and officers to the popular strip club ostensibly for Army “training,” Some “training” that was.

The United States Army in Hawaii has become a vacation resort on the taxpayer dime. Major General Ronald P. Clark desperately wants a third star to become a Lieutenant General. He and his boot-lickers are willing to do and say just about anything to ensure that happens.

Hey Pentagon, if you are listening…. you need to clean up Big Army Hawaii.

HISTORY CONTINUES TO REPEAT ITSELF – ARMY MAJOR REPORTS MASSIVE FRAUD, THEN IS ORDERED TO UNDERGO TWO PSYCH EXAMS – CORRUPT ARMY GENERALS SCRAMBLE TO COVER IT ALL UP

Shadrach, Meshach, and Abednego were thrown into a fiery furnace by King Nebuchadnezzar when they refused to bow down to the king’s image; the three were preserved from being burned to death. This famous Bible [ … Read More]

DIRECTOR OF THE DORN VA MEDICAL CENTER IN COLUMBIA, SOUTH CAROLINA THROWS A PTSD-STRICKEN VETERAN TO THE WOLVES – WOULD NOT ALLOW ANY VA EMPLOYEE TO COME TO HIS AID

When there’s something strange in your neighborhood, who ya gonna call? You don’t want to call the Veterans Administration, that’s for sure. If you were drowning and gasping for air, the VA will shove your [ … Read More]