Recently, the United States Secretary of Veterans Affairs sent out approximately nineteen million letters and pamphlets to all of America’s Veterans all over the world. The mailing cost for such a mailout may have been in the neighborhood of five million dollars. ($5,000,000). 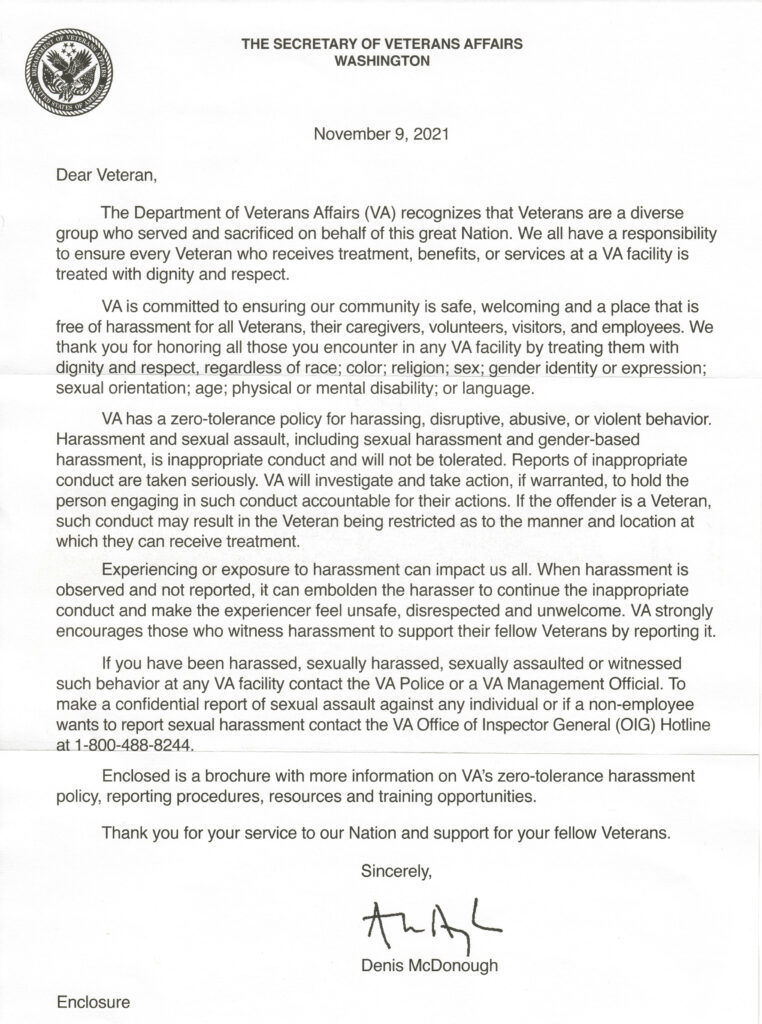 And, here is the pamphlet with no publication date that came with the letter…

So, what’s going on? Why all of a sudden is the VA Secretary concerned about workplace harassment, concerned enough to spend $5 mil tax dollars to threaten all veterans of the United States?

Why in the world did the VA Secretary draft up this letter on November 9th of last year, then mailed out the letter in March 2022?

Was there an unusual spike in sexual assault and harassment cases being reported?

Was the VA Secretary threatened by a female Member of Congress that he was not doing enough to address harassment and sexual assault in VA facilities? And, to prove her wrong, the VA Secretary mailed a letter to 19 million veterans.

Were key Congressional players threatening to reduce funding the the VA and Secretary McDonough decided to show everyone who’s boss at the VA?

Is there a Navy admiral who got caught raping an enlisted woman about ready to hit the news media? We still believe that an Army general raped and murdered Lavena Johnson.

Is the VA Secretary doing some political posturing in the hope of being considered for some plum assignment in some other capacity in the U.S. Government?

Why this? Why now?

Why waste all that money on paper and mailing fees to tell Veterans what they already know? Virtually everyone in the military knows the WOKE wave is moving through the military.

Why are virtually all of America’s veterans being threatened by the VA Secretary? Does anyone out there know what was the impetus for this massive mailout?

Our position on this is that it’s so unnecessary and such an tremendous waste of money. Every person in the military and every veteran who was in the military knows that sexual harassment, and especially sexual assault could get you a jail term in a quick damn hurry. We don’t need Secretary McDonough to tell us this.

The only people who do not know this or ignore it completely are the flag-ranking officer of the United States military who are allowed to retire to avoid prosecution, that privileged class who are indeed above the law.

All the VA needs to do is to enforce the laws they have on the books. One of the primary reasons women are being assaulted is because there is no accountability in America anymore.

Will Smith just committed an act of assault and battery before millions of people. Because he’s a movie star and very wealthy, he is considered above the law and will not be held accountable for a clear violation of law.

Please don’t threaten us Secretary McDonough. It’s beneath you sir. Some will say the word threaten is a bit too strong. They will say the letter and pamphlet was just a “reminder” of our duties as citizens to use more courtesy when dealing with people.

We veterans that are senior citizens do not need to be reminded of our duties to follow the law. Our perception from the letter and pamphlet is that it was a threat, that if anyone harasses or sexually assaults, they can expect to feel the full force of the law. That’s the way is should have always been.

Next time, consider not spending money on this ridiculous mailout, but rather spend that money on the veterans who the VA denies benefits to each and every day.

We ask our readers, does anyone know why all the vets are receiving this letter from the VA Secretary? Again, why now?

THE ARMY’S 25TH INFANTRY DIVISION,  IS WITHOUT A DOUBT ONE OF THE MOST CORRUPT UNITS IN THE UNITED STATES ARMY Major General Ronald P. Clark was removed as the top Army boss in Hawaii’s 25th [ … Read More]

Renewable energy was one of the ways we were going to combat global warming. Even with conflicted science on the topic, it seems logical that with all the millions of cars in the world spewing [ … Read More]