We’ve been holding back any commentary about the Eddie Gallagher trial because we believe there is a back story that has yet to be revealed. Even though we strongly feel there is so much more to this story, it’s high time that MilitaryCorruption.com weighed in to put things in perspective.

It began in Mosul, Iraq in the summer of 2017. For a variety of reasons, Navy Seal Chief Eddie Gallagher was not beloved by many in his Seal Team platoon. Gallagher was alleged to have stolen someone’s Red Bull energy drinks and consumed some items from a fellow Seal’s care package that he received from home.

The biggest complaints were about Gallagher’s brand of leadership. Members of his platoon felt his tactics were too aggressive needlessly placing their lives in more danger than was necessary. Complaints evolved from a chief with poor leadership skills, to the murder of innocent civilians and a teenage ISIS fighter.

The Navy may have ignored the other complaints, but was glad to delve into the allegation that Gallagher murdered a captive ISIS fighter. Charges for murder were levied against Gallagher, and when the Navy discovered he could not be bullied into confessing, a general court-martial was convened.

Gallagher was accused of stabbing a wounded teenage ISIS fighter to death, and shooting to death a young girl and old man from a sniper’s nest. Now he’s on trial in San Diego, California.

On June 20, 2019, the Seal Team medic sitting on the witness stand, confessed to killing the teenage ISIS fighter by asphyxiation. A tube had been inserted down the fighter’s throat because his neck had been injured causing a sucking wound.

The Seal Team medic said, he knew the teenage fighter was going to die anyway and decided to end it sooner than later by cutting off his oxygen. This dramatic revelation turned the whole courtroom upside down. Court observers thought with this new testimony, the Navy would drop murder charges against Chief Gallagher.

The Navy did not drop the murder charges against Gallagher. Apparently, the prosecutors did not believe the testimony of the Seal Team medic. Perhaps they thought the medic was attempting to provide cover for Gallagher with bogus testimony.

As Chief Gallagher was being held in pretrial confinement, the Navy was spying on the emails between him and his attorney.  There was also a dust up, as his wife Andrea Gallagher accused the Navy of deceiving President Trump on how her husband was being treated.

WHAT IS REALLY GOING ON?

This case is baffling many people. For some inexplicable reason, the proverbial rock-solid relationship between Seal Team members came apart at the seams. Did this all start with hurtful words and stealing the contents from a fellow Seal member’s care package, then escalated to murder charges?

When someone’s mail is intercepted and contents read or stolen, that gets very personal and we can fully understand if the Seal who was victimized was crazy angry about it. But, does that justify making up a story about the murder of civilians and an ISIS captive?

It’s possible that Gallagher was so domineering and overbearing, that when he scarfed up another Seal Team member’s goodies from a care package; it was the straw the broke the camel’s back. Again we ask, “Is this about murder(s), or just a visceral hatred of an overbearing, dictatorial chief petty officer?

When complaints from Seal Team members about Gallagher’s behavior and oppressive brand of leadership were cast aside, did Seal Team members up-the-ante by wrongfully accusing Gallagher of murder? They knew that in our politically correct world, the Navy would surely have to take some action against Gallagher.

OR… was Chief Gallagher in charge of a platoon of millennial pussies who would cry about any order they didn’t agree with. Gallagher was hated by his men. Come to think of it, General George S. Patton was hated by his men also. They say the men of the Third Army hated Patton worse than the Germans did.

Sometimes, that’s what leaders do, they push their men to get a maximum effort in order to achieve the goals and objectives they have been given. Again, is this a case of a chief petty officer with dubious leadership methods, being set up by his men for incarceration in Ft. Leavenworth?

WAITING FOR THE BACK STORY

We have attempted to contact Gallagher, or any advocate aware of what’s really driving this push to put him in Ft. Leavenworth. Obviously, the lawyers have demanded a strict code of silence. We fully understand the wisdom of that.

We have also attempted to contact the other members of his Seal Team (or their advocates) to tell us their side of the story, the information that somehow never gets into the courtroom. They may be under a similar gag order.

All we do know is, the Navy is hell bent on nailing Gallagher’s hide to the wall. In this politically correct world, our warriors are not allowed to end the life of a murderous ISIS fighter. A polite and civilized society does not kill people in captivity.

We are required to preserve his life so some sort of swap can be made like the Bergdahl swap, so the terrorists can be put back on the battle field to kill more of our people. The American fighter can be a lethal killer, but there has to be a switch that turns off the killing instinct once the enemy is defeated.

REMEMBER THE MY LAI MASSACRE?

Willaim Calley Jr. and his soldiers opened up on the village of My Lai on March, 16, 1968, either because Lt. William Calley was tired of insurgents from the village murdering his men, or because he and his men were just a brutal sadistic murderers.

BTW, the Hiller OH-23 Raven (helicopter) pilot (Hugh Thompson) who placed his aircraft between Calley’s troops and the villagers, put a stop to the killing.

The conversation between Lt. Calley and Hugh Thompson tells the story… 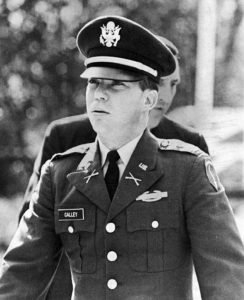 When news of the My Lai Massacre publicly broke, Thompson repeated his account to then-Colonel William Wilson, and then-Lieutenant General William Peers during their official Pentagon investigations.

In late-1969, Thompson was summoned to Washington, DC to appear before a special closed hearing of the House Armed Services Committee. There, he was sharply criticized by congressmen, in particular Chairman Mendel Rivers (D-S.C.), who were anxious to play down allegations of a massacre by American troops.

Congressman Rivers publicly stated that he felt Thompson was the only soldier at My Lai who should be punished, and unsuccessfully attempted to have him court-martialed.

Thompson was vilified by many Americans for his testimony against United States Army personnel. He recounted in a CBS 60 Minutes television program in 2004, “I’d received death threats over the phone… mutilated animals on your porch some mornings when you get up.”

Hugh Thompson died in January 2006 from cancer. Congressman Charles Boustany (R-La.) made a statement in Congress honoring Thompson, stating that the “United States has lost a true hero, and the State of Louisiana has lost a devoted leader and dear friend.”

HOW ABOUT SENATOR BOB KERRY

Obviously, Gallagher’s treatment of the teenage ISIS fighter cannot be compared to the Massacre at My Lai, but you get the point. At some point the killing has to stop, otherwise you end up with a My Lai Masacre.

Maybe a better example was Seal Team member Bob Kerry who later rode his military citations almost to the White House. President Nixon awarded Bob Kerry the Congressional Medal of Honor and he became the governor then senator from Nebraska.

Kerry’s men began by cutting the throats of 66 year-old Bui Van Vat and 62 year-old Luu Thi Canh’s and pulled their three grandchildren out from their hiding place in a drain and killed two, disemboweled one.

Then, these rangers moved to dug-outs of other families, shot dead fifteen (15) civilians (including three pregnant women), and disemboweled another girl. The only survivor was a 12-year-old girl named Bui Thi Luom who suffered a foot injury.

We do not have enough evidence to know if Navy Chief Eddie Gallagher is innocent or guilty of the crimes he has been charged with. We do know that, if Gallagher’s lawyer has any skill at all, he can expose the liars on the witness stand. If they made up these  allegations of murder against Gallagher, it should all come unraveled under intense cross-examination.

If these charges were all conjured up to “get even” with Gallagher, everyone of the accusers need a long stretch in prison themselves. If any of the Navy’s leadership who knew Gallagher was innocent of the charges, but allowed the prosecutors to move forward with a trial, should also be sent to prison with those who bore false witness against Gallagher.

America will find out soon, what direction the trial takes. Hopefully, true justice will prevail. Sadly, our experience is that military courts do not always dispense true justice.

ARMY INSPECTOR GENERAL CAUGHT ON HOT MIC – COLONEL “PHONY MF” CRUMBSNATCHER’S DECEITFULNESS CAME TO LIGHT AFTER HE HUNG UP THE PHONE, ONLY TO FIND OUT THE PHONE WASN’T HUNG UP!

For the record, we didn’t make up the name “CRUMBSNATCHER.” Someone else did. His real name is Colonel Krompecher, but we’ll keep the “Crumbsnatcher” moniker for now. Where deceitfulness is concerned, Crumbsnatcher is “Army Strong.” [ … Read More]

NAVY VETERANS ARE BACK-STABBED AND BETRAYED BY THE UNITED STATES SECRETARY OF VETERANS AFFAIRS WHO IS NOTHING MORE THAN JUST ANOTHER WASHINGTON POLITICAL HACK.  IT TURNS OUT VA SECRETARY ROBERT L. WILKIE JR. IS ONE OF [ … Read More]